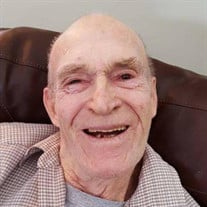 Joseph A. Kaiser, 86, died Sunday, October 4, 2020, at Midwest Home Health in Fergus Falls. Joseph Augustine Kaiser was born February 26, 1934, in Perham. He was the third son of Arnold and Mary Catherine (McAllister) Kaiser. He was baptized and received his First Holy Communion from Father James Mohm. When he was 14, he was confirmed in his Catholic faith by Father William Kloeckner. Joseph was an altar server who was proud that he could answer the prayers in Latin. Joseph followed his two brothers to St. John Prep in Collegeville, MN and graduated in 1952. After graduation, he enlisted in the U.S. Air Force and served honorably for eight years. Joseph had many jobs and many friends. He remained single. His favorite recreation was playing cards and croquet with his dad and Francis and Raymond Rian, summer and winter fishing, playing pool, and drinking beer at Collin’s Landing. He never got into any real trouble! He loved his Minnesota Twins and listening to country music. In his senior years, he moved to Wadena to be near his friend, Rose Mumm. In 2015, he moved to Fergus Falls and lived in a Senior Foster Care home. His niece and goddaughter, Mary Mahoney Weaver, became his guardian. He had good care and a thank you to Dan and Diane. Father Gamber was a faithful spiritual help to Joe. He was preceded in death by his parents; his brothers, Francis, Father John Kaiser, MHM; brother-in-law, Joseph Mahoney; sister-in-law, Barbara Kaiser, and one niece, Annette Santarini and one nephew, Michael Kaiser. Joseph is survived by his sister, M. Carolita Mahoney; three nieces and three nephews and their many children, and many cousins. One cousin who knew him well-stated, “He probably hitchhiked to heaven!” RIP, Joey! Visitation: 5:00 p.m. to 7:00 p.m. on Friday, October 9, 2020, at St. James Catholic Church, rural Underwood with a prayer service at 6:30 p.m. Visitation will resume one hour prior to the service at the Church. Mass of Christian Burial: 11:00 a.m. on Saturday, October 10, 2020, at St. James Catholic Church, rural Underwood Clergy: Father LeRoy Schik Interment: St. James Catholic Cemetery, rural Underwood Arrangements are provided by the Olson Funeral Home in Fergus Falls. Online condolences may be sent to www.olsonfuneralhome.com

Joseph A. Kaiser, 86, died Sunday, October 4, 2020, at Midwest Home Health in Fergus Falls. Joseph Augustine Kaiser was born February 26, 1934, in Perham. He was the third son of Arnold and Mary Catherine (McAllister) Kaiser. He was baptized... View Obituary & Service Information

The family of Joseph Kaiser created this Life Tributes page to make it easy to share your memories.