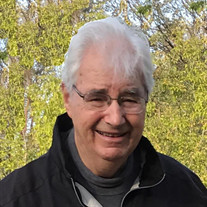 Joseph Allen Feigum (Joe), 87, a resident of Fergus Falls, died Sunday, March 29, 2020, peacefully at home. Joe was born January 4, 1933, to Oliver and Mabel (Sando) Feigum at Starbuck, MN. He grew up on a turkey and dairy farm near Starbuck with 3 brothers and 2 sisters. After graduating from Starbuck, Joe stayed on to help with the family farm. He enjoyed attending dances with one of his brothers, and it was at a ballroom dance in Alexandria where he met his dance partner for life. Joe married June Delores Johnson on September 5, 1954, at First Lutheran Church in Alexandria. After a couple years living in Minneapolis, Joe and June returned to the rural Carlos area and eventually purchased the family farm where June was raised. They spent most of their lives there, raised three children there and were active members of the Trinity Lutheran Church in Carlos. Joe ran a small grain and dairy farm, complete with pigs, chickens, horses and a white picket fence, for many years, as well as drove school bus. He loved the country life, taking walks around his land, tinkering with things outdoors, and when he needed a shed for his bus at home, or a deck or a pergola or a bench – he figured out how to build it himself. Joe and June enjoyed dancing on a regular basis and card club with neighbors on the farm. Joe took care of all things outdoors and June took care of all things indoors. Almost every year, they would revisit their honeymoon destination in the Duluth/North Shore Drive area until she could no longer. Joe and June did everything together. They spent their Golden Years in Fergus Falls near their daughter's family and enjoyed meeting new friends at Augustana Lutheran Church in Fergus Falls. After June displayed symptoms of Alzheimer’s, he cared for her as long as he was able. After June passed, Joe found comfort with his friends at Riverbend Apartments. He felt the people who lived there were like family and he was well cared for there. Joe is preceded in death by his wife, June; their son, Ronald Feigum; his parents, Oliver and Mabel Feigum; his brothers, Norman, Paul, and Orville Feigum; brothers-in-law, Bill Davids and Darwin Schmoyer, and sister-in-law, Jane Feigum Balgaard. Surviving Joe are his children, Leslie (Jean) Feigum of Carlos and Sue (Marty) Mohagen of Ottertail; four grandchildren, Matt (Angie) Feigum of Baxter, Ben (Jen) Feigum of Sartell, Josh (Kristin) Mohagen of Fergus Falls, and Dan (Olivia) Mohagen of Fergus Falls; eight great grandchildren, and two sisters, Sylvia Davids of Alexandria and Dorothy Schmoyer of Golden Valley. Arrangements for celebration of life with family to be determined at later date with Pastor Rod Spidahl. Interment: Trinity Lutheran Cemetery, Carlos, MN Arrangements are provided by the Olson Funeral Home in Fergus Falls. Online condolences may be sent to www.olsonfuneralhome.com

Joseph Allen Feigum (Joe), 87, a resident of Fergus Falls, died Sunday, March 29, 2020, peacefully at home. Joe was born January 4, 1933, to Oliver and Mabel (Sando) Feigum at Starbuck, MN. He grew up on a turkey and dairy farm near Starbuck... View Obituary & Service Information

The family of Joseph Feigum created this Life Tributes page to make it easy to share your memories.