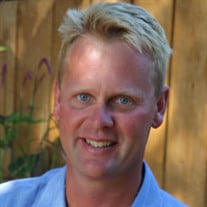 Jonathan E. Martinson, 44, of Fergus Falls, died on Monday, October 8, 2018, at his home surrounded by his loving family. He was born February 8, 1974 to Robert and Judith (Miller) Martinson in Rolette, ND, where he grew up and graduated from high school. Jon was born with farming in his blood and started helping his father and uncles farm as a young boy. He was an active member and confirmed in the Ebenezer Lutheran Brethren Church of Rolette. Jon was also a stand-out athlete and was named Rolette County Male Athlete of the Year in 1992 after two trips as quarterback to the North Dakota 9-man state football playoffs. After high school, Jon completed a degree in Agricultural Mechanics/Farm Management at North Dakota State College of Science. After completing his degree Jon worked for various farm operations in the area, with his longest tenure at the Stoltenow Farm in Wahpeton. Jon was most recently employed as the Farm Production Manager at Adams Seed in Wendell. Jon will be remembered as an incredibly hard worker, going above and beyond to complete tasks thoroughly, and always sharing a laugh or two with those he worked with. During his young adult years, Jon attended the The Naz in Fergus Falls. During a short-term mission trip to El Salvador, he met his future wife Tessa who served as a missionary there. Jon and Tessa married in August of 2008 and their family grew to include their two beautiful children, Gentry and AJ. Jon enjoyed spending time with his wife and children, as well as his extended family and enjoyed many Martinson reunions at Lake Tonseth every 4th of July. The reunions at Lake Tonseth would not be complete without Jon’s water show and stunts while tubing or wakeboarding. Whether throwing touchdowns on the football field or combining in the corn field, Jon’s loving servant’s heart endeared him to many. He will be remembered off the field for his steadfast faith in Jesus Christ. Jon desired to live out his faith by serving others. He will be remembered for the many humble ways he lent a helping hand from installing docks to helping someone move, from reroofing houses to shoveling snow – seeking no recognition for himself. He shared his gifts and talents with many, all for the glory of God. His laughter, humor, and a big smile that was bigger than the sun is what many family and friends remember when they think of Jon. He had a zest for life and a keen sense of humor that kept everyone laughing. Jon’s energetic personality and ability to strike up a conversation made him a stranger to no one and a friend to all. Preceding him in death were his grandparents Robert and Lorraine Martinson and Herbert and Selma Miller, and his sister Janice. Survivors include his wife Tessa and children Gentry and AJ, his sisters Janelle(Paul) Denton, Joanne(Trevor) Davis, his parents Robert and Judith Martinson along with many aunts and uncles, cousins, nieces and nephews. Gathering: 6 to 7 p.m. Friday, October 12, 2018 at the Church of the Nazarene in Fergus Falls with a Service of Remembrance at 7 pm. Celebration of Life Service: 11:00 a.m. Saturday, October 13, 2018 at Life Church in Fergus Falls with a gathering one hour prior to the service Clergy: Pastors Steve Hoffman and Clay Mitchell Interment: Oak Grove Cemetery, Fergus Falls, MN Arrangements are provided by the Olson Funeral Home in Fergus Falls Online condolences may be sent to www.OlsonFuneralHome.com

Jonathan E. Martinson, 44, of Fergus Falls, died on Monday, October 8, 2018, at his home surrounded by his loving family. He was born February 8, 1974 to Robert and Judith (Miller) Martinson in Rolette, ND, where he grew up and graduated from... View Obituary & Service Information

The family of Jonathan E. Martinson created this Life Tributes page to make it easy to share your memories.