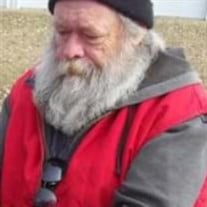 John David Meyer, 65, of Fargo, ND, died Monday, November 30, 2020, unexpectedly at his residence. John was born February 5, 1955, to Berdyne (Meyer) Duske in St. Paul, MN. He attended school in Fergus Falls, graduating from Fergus Falls Senior High School in 1973. He married the love of his life, Christy Courteau. They later divorced. He was a member of the US Air Force for four years. John served in the Vietnam War towards the end of it. He was first stationed in Germany and then in Michigan. He received an Honorable Discharge and then returned back home to Fergus Falls. He worked 25 years and retired from the Regional Treatment Center in Fergus Falls. John’s mother, Berdyne, retired from there as well after 30 plus years. His grandfather, Clarence Meyer who was a father figure to John, also worked there for 30 plus years. He was a member of the VFW and wore his Vietnam hat with pride. He loved his country. John loved the outdoors, taking his sons hunting and fishing. He hung up the hunting rifle and fishing rod a few years ago. He also enjoyed his parties at the Bolstad’s. Preceding him in death were his mother, Berdyne (Meyer) Duske; cousins, Davy McCormack and Marvin Bolstad, and aunt, Fayette McCormack. John is survived by the love of his life, Christy Courteau; his sons, Sean Meyer and Ross (Dana) Meyer; grandchildren, Macy Meyer, Jenna Williams (Alyse Carlson), Michael Williams (Autumn Gray), and Bailey Barry; great-grandchildren, Zayden Jackson and Kaiser Jackson, and many cousins, friends, and work mates. Interment: Fargo National Cemetery, Harwood, ND Arrangements are pending with the Olson Funeral Home in Fergus Falls. Online condolences may be sent to www.olsonfuneralhome.com

The family of John David Meyer created this Life Tributes page to make it easy to share your memories.