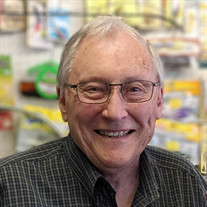 John “Bill” Hudson Burton III died Tuesday, February 1, 2022, at Lake Region Healthcare in Fergus Falls, MN, from heart failure. John was born April 2, 1932 to Mary Belle (Ricketts) and John Hudson Burton Jr in Demopolis, AL. He was baptized August 27 of that year in the Church of the Advent Episcopal in Birmingham, AL. After the tragic, sudden death of his mother, John was raised by his grandparents and Aunt Gladys. John graduated from the Wilcox County High School in Camden, AL on May 22, 1950. He enlisted in the United States Air Force on February 11, 1951 and served in the Korean and Vietnam Wars. While stationed in Alabama, an Air Force buddy invited John to North Dakota to spend the holidays there with him. While there, he attended a barn dance and met his future wife, Marilyn Leanore Swanson. After a few years of courting, mostly through letters, they were married on June 24, 1955 in Tullahoma, TN until her passing on December 9, 1985. They had two sons together, John and Carl. John, Marilyn, and the boys were stationed all across the U.S. before finally moving to Minot Air Force Base, while his family lived nearby in Valley City. He earned a Bronze Star on December 17, 1972 and retired while at Minot after more than 22 years of service on June 1,1973 as a Chief Master Sergeant, the highest enlisted rank in the Air Force. He went on to obtain his MS in Educational Administration from Tri-Valley College in Valley City and settled his family in Rothsay to act as Principal of Rothsay High School while also teaching Social Studies. John served as Mayor of Rothsay from 1981-1985 and President of the Rothsay Lions International. After retiring from Rothsay in 1987, he returned to Camden, AL to be the Director of Curriculum and Instructional Services in the Monroe County School System and care for his aunt, Gladys. He retired from that position in 1998. Even in retirement his life continued to be eventful- including surviving a tornado in 2007 that took his entire house and threw him dozens of feet from his home. John eventually made his way back to Minnesota in 2015 where he resided at Mill Street Residence in Fergus Falls, MN. He enjoyed golfing, fishing, bowling, ice cream, playing slots at the casino, and was a dedicated Alabama Crimson Tide football fan. John had an unwavering faith and enjoyed attending Bible Studies and daily readings from his devotionals. He was a well-respected airman, educator, and administrator and touched many lives both during and after his years working in education and in the military. Survivors include: sister-in-law Ruth Larson; daughters-in-law Diane (spouse of John) and Jane (spouse of Carl); his grandchildren Elijah and Sarah Burton of Fort Walton Beach, FL, Tanner and Taylor Burton of Kansas City, MO, Nick and Vanessa Burton of Ashby, MN, Tara Johnson of Fergus Falls, MN, Travis and Katrina Johnson of Fergus Falls, MN; nine great-grandchildren Sawyer, Nolan, Eleanora, Archer, Eden, John Weston, Parker, Zachary, Griffin; and loving friends DiAnne Biss and Jeff Muth. In lieu of flowers, donations can be sent to Lake Region Healthcare Cancer & Research Center in Fergus Falls, MN. Service: 1:00 p.m. Tuesday, February 8, 2022 at Olson Funeral Home in Fergus Falls, with visitation one-hour prior to the service at the funeral home. Clergy: Reverend David Strom and Chaplain Deb Forsner Interment: Memory Gardens of Valley City, Valley City, ND Arrangements are provided by Olson Funeral Home in Fergus Falls. Online condolences may be sent to www.olsonfuneralhome.com

The family of John "Bill" Burton created this Life Tributes page to make it easy to share your memories.