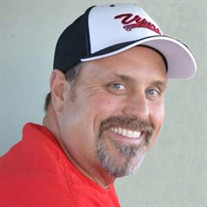 Joel A. Kotschevar, 50 of Fergus Falls, MN, passed away of a heart attack in his beloved Game Room on October 13, 2018. Joel Alan Kotschevar was born March 3, 1968 in Cavalier, ND; the 3rd of 4 children of Dennis and Inez (Guthmiller) Kotschevar. He attended grade school in Casselton, ND and Enderlin, ND, graduating from Enderlin High School in 1986. He earned a degree in Business Management from NDSCS in 1989. On June 20, 1992, he was united in marriage to Christine Lee Bartholomay. Their first home was in Bottineau, ND, where he worked for Metropolitan Federal Bank. He later managed the Cenex C Store in Bottineau. Their three children, Claire, Kate and Brock, were born while they lived there. In 2002, the family moved to Fergus Falls, MN. Joel worked for Sunmart, Lakeway Market, and NDSCS(Wahpeton). In 2009, he began as the Facilities Services Supervisor at M-State, Fergus Falls campus, where he worked until his death. Joel loved sports and was very involved in his children’s sporting events and activities. He coached their teams, announced at games, and led cheers in the stands. He was one of the proudest members of Otter Nation. He was also a fan of the Bison, the Seahawks, and fantasy football. He loved to fish and whenever he had the chance you could find him on the lake. He will be remembered as a fantastic cook, known for his Joelupa sauce, and a great fish fry. There were many laughs every time he hosted a get-together in the Game Room. He was a board member of the Fergus Falls Youth Baseball Association for several years, and a member of the Our Lady of Victory Catholic Church. Joel will be sadly missed by his wife of 26 years, Chris; his daughters, Claire and Kate and son, Brock all of Fergus Falls; his father, Dennis Kotschevar, Wahpeton, ND; mother, Inez Lunde, Breckenridge, MN; brother, Brian (Sharon Syvertson), Detroit Lakes, MN; sister, Karen (Kurt) Anderson, Colfax, ND; sister, Julie (Mike) Bommersbach, Detroit Lakes, MN; parents-in-law, Ralph and Connie Bartholomay, Enderlin, ND; sister-in-law, Angie (John) McCroskey, Fargo, ND; brother-in-law, Stephen (Denise) Bartholomay, Casselton, ND; brother-in-law, Scott (Linda) Bartholomay, Sabin, MN; step-sister, Kim (Carter) Hansen, Wahpeton, ND; many nieces and nephews and their families, and friends too numerous to count. He was preceded in death by his step-father, Duane Lunde. Joel was a loving and caring husband and father. He was so proud of his children’s accomplishments. Joel lived life to the fullest and was always there to brighten the lives of others. He will remain in our hearts forever. In lieu of flowers, memorials are preferred to Fergus Falls ISD 544 Foundation. Visitation: 4:00 PM – 7:00 PM Thursday, October 18, 2018 at Olson Funeral Home with a public prayer service at 6:30 PM. Visitation will resume one hour prior to the service at the Church. Mass of Christian Burial: 11:00 AM Friday, October 19, 2018, at Our Lady of Victory Church Fergus Falls Clergy: Fr. Alan Wielinski and Deacon Chuck Kampa

Joel A. Kotschevar, 50 of Fergus Falls, MN, passed away of a heart attack in his beloved Game Room on October 13, 2018. Joel Alan Kotschevar was born March 3, 1968 in Cavalier, ND; the 3rd of 4 children of Dennis and Inez (Guthmiller) Kotschevar.... View Obituary & Service Information

The family of Joel Alan Kotschevar created this Life Tributes page to make it easy to share your memories.