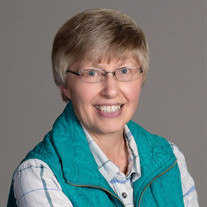 JoAnn Cline, 63, of Fergus Falls, died Sunday, July 19, 2020, after a courageous five-year battle with glioblastoma cancer, under the care of PioneerCare and LB Hospice. JoAnn Lynn Cline was born November 29, 1956, in Fergus Falls, the daughter of Loren (Bud) and Deloris (Witt) Tommerdahl. She was baptized and confirmed at First Lutheran Church. She attended McKinley Elementary School and graduated from Fergus Falls High School in 1975. She continued her education at the Fergus Falls Community College (now M-State) and received a Certificate in Legal Secretarial Studies. For several years she continued taking classes on a part-time basis and received an Associate Degree in Secretarial Studies and an Associate in Arts in General Studies. She also completed classes offered at the FFCC through Northland Community College and received an Associate in Science degree in Law Enforcement. On June 17, 1981, JoAnn married Gordon Cline at First Lutheran Church in Fergus Falls. Soon after, Gordon rescued a kitten from the Westridge Mall parking lot and since that time they have shared their home with a total of seven, either adopted or rescued cats. Over the years JoAnn worked for the Victor Lundeen Co., Rufer, Hefte, Pemberton, Sorlie & Sefkow Law Office, Norwest (now Wells Fargo) Bank and for 27 years as a Records Technician with the Otter Tail County Sheriff’s Office, retiring in February of 2016. JoAnn loved the outdoors and through the years enjoyed playing softball, riding bicycle, and going camping and hiking. When she turned 40 she bought her first horse, Ace, a Polish Arabian, and 15 years later a second horse, Jack, a registered quarter horse. With them, she enjoyed taking horseback riding lessons at Red Horse Ranch, competing in ACTHA (American Competitive Trail Horse Association) rides and going trail riding and horse camping with friends. She also loved sharing the gift of music and continued to play her French Horn after High School at M-State, in a brass quintet named Brassability, for local Church services and up until just a few years ago with the Carlisle Band. She also loved to dance and took lessons for square dancing, clogging, social dancing and line dancing. Photography was another of her many passions. While working for the Sheriff’s Office she also volunteered as an Assistant Post Advisor for the now disbanded Law Enforcement Explorer Post 310 and for 10 years with the Otter Tail County Sheriff’s Posse. She was also a past member of the Fergus Falls Fish and Game Club and Red Horse Riders Saddle Club. Preceeding her in death were her parents, her uncle and aunt, Merle and Lucille Tommerdahl, her uncle and aunt, Russell and Marie Stock and her father-in law Norris Cline. She is survived by her husband, Gordon of Fergus Falls; sister, Jean (Colin) Wahlgren, mother-in-law, Winona Cline, brothers-in-law, Guy (Melody) Cline, Greg Cline, sister-in-law, Peggy (Tim) Brusven, nephews, Justin Cline and David Brusven and several cousins. Memorials are preferred to Lake Region Healthcare Cancer Care and Research Center or Stavanger Church. Public Graveside: 10:30 a.m. Saturday, August 29, 2020 at Stavanger Cemetery, rural Fergus Falls, MN. The service will be available on the radio from the church parking lot, if you are more comfortable remaining in your car. The family requests that masks are preferred at the graveside and please kindly remember social distance when approaching the family. Clergy: Reverend John Juhl Arrangements provided by the Olson Funeral Home in Fergus Falls. Online condolences may be sent to www.olsonfuneralhome.com

The family of JoAnn Cline created this Life Tributes page to make it easy to share your memories.