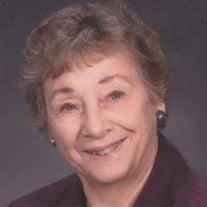 Joan (Lutz) Scholberg, 89, of West Fargo, died Thursday, October 29, 2020, at the Good Samaritan Society in Battle Lake. Mom was born on November 27, 1930, to Stella and Claude Lutz in Des Moines, Iowa. As a young teenager, she was a cheerleader and enjoyed playing basketball. She set her sights on daring adventures by moving to Minneapolis, Minnesota, where she met the young and dashing Richard Scholberg. They were both employed by Bemis Bag Company. At first, she was not interested in this party-boy, but in time, he wooed her with his charms. She often recounted their courtship with fond memories of dancing, picnics, and socials. She spoke of how respectful he treated her and her appreciation for the sense of security she felt as a result. They married on September 17, 1955. Their early married years lead them to Bismarck, North Dakota, where Dad worked for GE Corporation. They later returned to St. Paul, where Karen was born. In 1959, the young family transferred to Fargo, North Dakota, and soon after Doug was born. Mom was very artistic to say the least. She enjoyed rosemaling and creating exquisite paintings of Crystal Lake and nature. Her pieces have become valuable treasures to many and will mark her love for the arts, nature, and the recipient. She found a great sense of calm and peace when she painted. Mom loved to bake and has several albums of blue ribbons won for her homemade bread. She won so many blue ribbons that the Fargo Forum ran an article featuring this proud homemaker. She was also active in the local PTA, Olivet Church Ladies Circles, Sunday School, and Sweet Adeline’s. She worked in the Fargo Public School System for 30 years with her specialty in special education and art. One dream Mom and Dad had was to have a piece of land by the lake. They purchased land on Crystal Lake, Pelican Rapids, Minnesota. Together, they cleared the land and readied a location for their first ‘cabin’ and later built a year-round home. Their joy was having the grandkids come from near and far to enjoy fishing, swimming, and playing cards. Many evenings were spent playing ‘Hand and Foot’ and ‘Golf’ where Mom showed no mercy to her opponents. We will always carry the memory of Mom floating on her little baby float. She would receive a new one yearly, usually on Christmas. She and Dad loved to cross country ski, the NDSU Bison teams, the Twins, and singing and dancing in the kitchen. After nearly 30 years on their beloved Crystal Lake, they returned to Fargo. Dad passed away in 2016. Preceding Mom in death: her parents, Stella, and Claude; sister Claudine; and brothers Hank and John. She leaves her children Karen and Doug (Laurie); grandchildren Douglas (Theresa) Scholberg, Brandon (Hannah) Scholberg, Chad (Elizabeth) Jacobson, Luke Mostue, and Brianna Mostue; great-grandchildren Alyssa, Angela, Madison, Hayley, Jaymie , Gunner, Nora, Carson, Elin, and Aiden; son-in-law, Larry; sister Rosalie; brothers David (Mary) and Dick; sisters-in-law, Joyce and Fran; several nieces and nephews; and all the friends she made and valued throughout her life. Services are being planned for a later date. Arrangements are provided by the Olson Funeral Home in Fergus Falls. Online condolences may be sent to www.olsonfuneralhom.com

Joan (Lutz) Scholberg, 89, of West Fargo, died Thursday, October 29, 2020, at the Good Samaritan Society in Battle Lake. Mom was born on November 27, 1930, to Stella and Claude Lutz in Des Moines, Iowa. As a young teenager, she was a cheerleader... View Obituary & Service Information

The family of Joan Scholberg created this Life Tributes page to make it easy to share your memories.