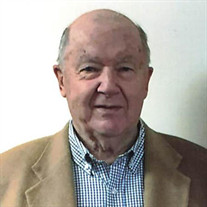 Jerome C. “Jerry” Johnson, 82, a resident of Fergus Falls, died peacefully on Tuesday, February 23, 2021, at Lake Region Healthcare in Fergus Falls. Jerry was born June 10, 1938, to Norman and Helen (Nelson) Johnson in Pelican Rapids. He attended school in Pelican Rapids, graduating in 1956. After high school he attended North Dakota State College of Science and earned his degree as an Electrician in 1959. On September 28, 1958, Jerry married Verna Schierman at Trinity Lutheran Church in Pelican Rapids. He was a Journeyman Electrician for Dillon Electric from 1959 to 1960. He then worked for Edling Electric and Mollerud Electric in Fergus Falls, Rick Electric in Breckenridge, and Moorhead Electric in Moorhead. Jerry purchased shares of Moorhead Electric and then started Fergus Electric in Fergus Falls, retiring in 2010. He was in business for 25 years. Jerry was a member of the Eagles, Elks, Bethlehem Lutheran Church in Fergus Falls, and Lakes Area Shooting Center. He enjoyed going to auctions, playing cards, deer and duck hunting, fishing, and trips to Canada. He loved animals, especially dogs. Preceding him in death were his parents; brother, Charles; son, Mark; brothers and sisters-in-law, Al and Becky Schierman and Wes and Mary Schierman. Jerry is survived by his wife, Verna Johnson of Fergus Falls; children, David Johnson (Anita Huseby) of Moorhead and Paul Johnson of Miami, FL; grandchildren, Charles “CJ” Johnson, Jennifer Johnson, Jillian Johnson, and Lucia Ho; great-grandchild, Bentley Elle; brother-in-law, Warren Schierman of Fargo, and several very close cousins and a host of friends. A personal note from Verna: Jerry was diagnosed with esophagus cancer in October 2019. He had both chemo and radiation during November and December, a pet scan in January, and again during the summer revealing “no cancer.” Then Covid-19 hit early 2020 for many parts of the world. Minnesota shutdown in March-schools, health providers, businesses, and activities. The state re-opened at 50%, shutdown and again re-opened periodically. In November, a pet scan revealed cancer spots on the liver and again the esophagus. We spent a week at Sanford in Fargo. Home with care from Home Health to strengthen him and we started him with Xeloda chemo pills. On Friday, February 19, we heard “There’s nothing more we can do, the cancer has spread.” Jerry and I spent 24- hour days, weeks, and months together during the last year. One word describes him, “content.” He was a “giving man.” He hurt for the handicapped and felt the need to help the less fortunate. Today phone calls from our friend’s children, tell over and over that he was one “favorite” Dad. The one disagreement Jerry and I had, for years, was over lake property. He did not want ownership of two homes. We rented for 20-years, finally in 2003 we purchased and rebuilt, then in 2011 purchased a year-round home, all on North Lida. Jerry referred to it as “the work camp.” After a meal with family and friends around the table, he’d tell me with pride, “It doesn’t get any better that this!” I’m sharing this because it was the lake property that we all felt serenity and contentment. God’s ways are not our ways, they are so much better. Blessed be our memories of Jerry, a loving husband, a giving father, a caring grandfather, and a loyal friend. Memorials are preferred to the Cancer Center, Bethlehem Church Foundation, Lakes Area Shooting Center or donor’s choice. A private family service will be held. Please refer back to the funeral home website and Jerrys’ Tribute Wall for a link to the Live-stream on March 3, 2021 at 3:00 p.m. Public Walk-through Visitation: 4:00 p.m. to 6:00 p.m. Wednesday, March 3, 2021, at the Olson Funeral Home in Fergus Falls Arrangements are provided by the Olson Funeral Home in Fergus Falls. Online condolences may be sent to www.olsonfuneralhome.com

The family of Jerome C. "Jerry" Johnson created this Life Tributes page to make it easy to share your memories.