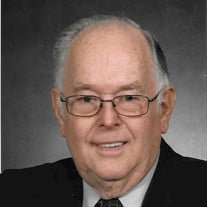 Jerald LaVerne Johnson (Jerry), 82, of Fergus Falls, passed away the morning of February 7, 2020, after a ten- month battle with cancer. He was born October 14, 1937 in Radcliffe, Iowa, the son of Gaylord and Constance (Hodnefield) Johnson. He graduated from Radcliffe High School in 1955, and in December, 1956, moved to Fergus Falls to join his family who had moved earlier that year. On August 24, 1968, he married Betty L. Danielson at First Baptist Church in Fergus Falls. From 1956-64 Jerry served his country in the ND Air National Guard. In 1959, he began his employment with Otter Tail Power Company as a surveyor with the Civil Engineering Department and later worked as an Electric Serviceman in the Company’s Rugby and Oakes Divisions. In 1969 he transferred to the Operations and Engineering Computer Department where he worked on the company’s recently purchased GE4020 computer, retiring in 1998 as Computer Hardware Analyst. Over the years, he helped family and friends with their various computer questions. In retirement he worked part-time at the Fergus Falls airport while his cousin Dennis Fuhrman was the airport manager. A man of many interests and abilities, Jerry was a true “do-it-yourself” man: creating, repairing and repurposing things. He was interested and knowledgeable in history, science, technology and anything aviation-related. As a young boy his life’s goal was to be a full-time airline pilot, an interest encouraged when his uncles owned a Piper J-3 Cub and gave him rides. At age 18 he got his private pilot’s license and years later his commercial license and instructor’s certificate. While living in Rugby, he bought a Cessna 140 and enjoyed giving family and friends rides. Most importantly, Jerry was a man of faith in the Lord Jesus Christ. Claiming the promise of Proverbs 3:5-6, he firmly believed the Lord had directed him into a career path different from his desire, but into one where his abilities could be used for a greater purpose. He was a man of integrity, patience, caring, kindness and had a ready smile. He enjoyed coffee with his “Senate” and McDonalds friends. For many years he was part of the FFRC Flyers, enjoying the camaraderie with his fellow flyers and the changing technology of the hobby. He was proud to teach his grandsons how to fly. Additionally, he was a licensed amateur radio operator (KØQQS), and part of the Lake Region Amateur Radio Club. Jerry is survived by his wife, Betty; daughters, Amy of Silver Bay and Carrie (Greg) Rogers of Moorhead; grandsons, Max Rogers and John Rogers, and sister, Pat Johnson of Minnetonka. Preceded in death by his parents and sister, LaVonne Peterson In lieu of flowers, memorials may be directed to LB Hospice or donor’s choice. Visitation: 5:00 – 7:00 p.m., Friday, February 14, 2020, at the Olson Funeral Home, Fergus Falls with sharing time at 6:30 p.m. Visitation will resume one hour prior to the service at the church. Service: 11:00 a.m. Saturday, February 15, 2020 at Bethel Lutheran Church in Fergus Falls. Clergy: Reverends John Kilde and Ed Monson Interment: At a later date at Knollwood Memorial Gardens, Fergus Falls Arrangements are provided by the Olson Funeral Home in Fergus Falls. Online condolences may be sent to www.olsonfuneralhome.com

Jerald LaVerne Johnson (Jerry), 82, of Fergus Falls, passed away the morning of February 7, 2020, after a ten- month battle with cancer. He was born October 14, 1937 in Radcliffe, Iowa, the son of Gaylord and Constance (Hodnefield) Johnson.... View Obituary & Service Information

The family of Jerald "Jerry" L. Johnson created this Life Tributes page to make it easy to share your memories.