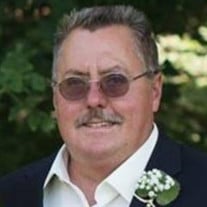 Jeffrey “Jeff” Jay Sundal, 60, of rural Dalton passed away peacefully in his sleep, Tuesday, October 20, 2020, at his home. Jeff was born July 2, 1960, to Harlan and Lorraine (Sundberg) Sundal in Fergus Falls. He graduated from Fergus Falls Senior High School. He was baptized and confirmed at Augustana Lutheran Church in Fergus Falls. He started working for himself at a young age and took great pride in every job he did, no matter how big or small. This work ethic followed him throughout his lifetime. His construction company was his pride and joy and he never refused to help anyone who asked. He was a jack of all trades and his work was top quality. Jeff was a perfectionist and everyone trusted him to get the job done right. On June 21, 1985, Jeff married Jeanne Johnson at Augustana Lutheran Church in Fergus Falls. He was passionate about his politics, music, hot rods, and family (not particularly in that order)! He was a long-standing member of the NRA and a firearm enthusiast. He loved books, especially history and he loved a good political debate. His most significant personal achievement was buying an old abandoned house on Highway 82 that he turned into a home. Preceding him in death were his father, Harlan; grandparents, John and Anna Sundberg and Hawkin Sundal and Hilda Hart. Jeff is survived by his wife, Jeanne of Dalton; daughter, Laura (Dan) Bolstad of Battle Lake and grandson, Colt Bolstad and another grandchild on the way; son, Andrew Sundal of Dalton; daughter, Amber Sundal of Eagan; his mother, Lorraine of Fergus Falls; brother, Mike Sundal of Fergus Falls, and step-sister, Susan Sundal of Des Moines, IA. “When you hear of my death – believe nothing of it, for I have just begun to live.” A Private Family Service will be held at the Olson Funeral Home. Please refer to Jeffrey’s tribute wall on the funeral home website for a live-stream of the service at 11:00 a.m., on Friday, October 23, 2020. Clergy: Reverend Mark Johnson A public gathering will be held at Zion Sarpsborg Free Lutheran Parish in Dalton, MN following the service. Arrangements are provided by the Olson Funeral Home in Fergus Falls. Online condolences may be sent to www.olsonfuneralhome.com

The family of Jeffrey Sundal created this Life Tributes page to make it easy to share your memories.