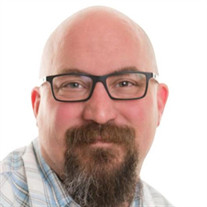 Jason Michael Kirchner, 41 of Dalton MN died unexpectedly Saturday July 10th, 2021. Jason was born August 26, 1979 to Lawrence and Carolyn (Bauman) Kirchner at the Hennepin County Medical Center in Minneapolis MN. He attended Westbrook-Walnut Grove High School in Westbrook MN. He then attended Alexandria Technical College and graduated with a degree in small engine mechanics in 2000. Afterwards, he was the Small Engine Tech and Parts Manager at Dalton Sports and Buy-More Parts and Service. He was regarded by many as “the best parts man ever.” Jason was an active member of The Sons of the American Legion in Underwood MN; both of Jason’s grandfathers served in the Army Airforce during WWII. Jason took great pride and enjoyment in his 18 years on the Dalton Fire and Rescue force. At the time of his passing, he was the Assistant Chief. Jason was a wonderful, loving, and involved father. The best part of his day was getting the kids up and ready for daycare. He kissed Owen’s forehead and gave a kiss on each check to Aubree while she returned the kindness. He loved seeing Owen’s smiling face and giving “bear hugs” to Aubree. Frequently you found him sleeping with Owen on his chest and Aubree on the couch next to him. He was a supportive, dedicated, and compassionate partner. He put the needs of his family before his own. He loved cooking, entertaining, racing, watching NASCAR, snowmobiling out west, watersports, riding motorcycles (especially his Harley), and spending time with family on the lake and camping. He loved his dogs: Deuce, Boone, and Kane. Jason’s talents also included homebuilding and landscaping; he built a beautiful home for himself and his family. Jason was humble in his intelligence, he was quick to help a friend, a wonderful son, the best big brother, and all around one of the best people you could have ever known. He will always be missed and remembered. He was preceded in death by his grandparents: Lawrence and Bernice (Sellnar) Kirchner, Henry and Eunice (Schneider) Bauman, and his “second mom” Betty Bergerud. Jason is survived by: his life partner Erica Bergerud, their children Aubree Ann Kirchner (3 years) and Owen Lawrence Kirchner (6 months); his parents Lawrence and Carolyn Kirchner; his sister Christine and spouse George Zettles, his nieces Ella Grace Zettles, Ava Rose Zettles, and Natalie Shaviya Zettles; sister-in-law Rachel Bergerud and partner Jeff Engelstad, his nieces Daidre and Sophie, and brother-in-law, Jesse Bergerud. Also, his many aunts, uncles, cousins, and great friends. Visitation: 5:00 p.m. to 7:00 p.m. Thursday, July 15, 2021, at the Dalton Community Center, 114 Main St Dalton, MN 56324 Service: 11:00 a.m. Friday, July 16, 2021, at Zion-Sarpsborg Free Lutheran Church in Dalton, MN Clergy: Reverend Mark Johnson Interment: Aastad Cemetery, rural Fergus Falls, MN Arrangements are provided by the Olson Funeral Home in Fergus Falls. Online condolences may be sent to www.olsonfuneralhome.com

The family of Jason Kirchner created this Life Tributes page to make it easy to share your memories.