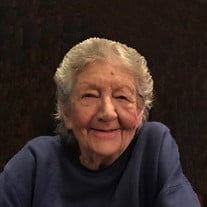 Janice Carol Ramsey, 83, of Fergus Falls, died unexpectedly Thursday, January 2, 2020, at her residence in Fergus Falls. Janice was born January 1, 1937, to Pearley and Lilac (Olson) LaValley in Clitherall, MN. In her early years she grew up in the Clitherall area, attending high school in Battle Lake. In January of 1955 she married Robert Karst in Battle Lake. The couple resided in Fergus Falls, where her husband worked in the family business, Hintgen Karst Electric. She worked at the Sky Line Café at the airport, was a cashier at Service Food, an Avon representative, and also at Big Chief, just to mention a few. In October of 1976, she married Dale Ramsey in Sioux Falls, SD. They resided in Fridley where she managed a Country Kitchen. Her husband drove truck for Midwest Motor Express. Dale died on October 5, 1977, as a result of an accident near Hillsboro, ND. In 1980 she moved to a home on Walker Lake and purchased and ran J & J Eatery and Pub in Perham until the mid-80’s. She then moved back to Fergus Falls where she worked at More-4 Superstore. She enjoyed gardening, bowling, knitting, ceramics, cooking, dancing, and was an avid Minnesota Twins fan. She was a member of the Elk’s Auxiliary, and a former member of the Bethlehem and Aurdal Lutheran Churches. Janice was preceded in death by her parents; both husbands; two brothers, Verdell and Alan LaValley; a sister, Renee Carr, and a son-in-law, Ross Florand. She is survived by six children, Deb Karst of Woodbury, Kevin Karst of Osage, Dan (Wendy) Karst of Underwood, Teresa (Todd) Smedstad of Fergus Falls, Jan Florand of Andover, and James Karst of Fergus Falls; 15 grandchildren; five great-grandchildren; sisters, Marlys (Emil “Manny”) Madsen of Fergus Falls and Dorothy “Dot” (Orin) Schueler of Tucson, AZ and numerous nieces and nephews. Visitation: 5:00 to 7:00 p.m. Wednesday, January 8, 2020 at the Olson Funeral Home in Fergus Falls, with a prayer service at 6:30 p.m. Visitation will resume one-hour prior to the service at the funeral home. Service: 1:00 p.m. Thursday, January 9, 2020 at the Olson Funeral Home in Fergus Falls. Clergy: Reverend James Amspacher Interment: Oak Grove Cemetery, Fergus Falls Arrangements are provided by the Olson Funeral Home in Fergus Falls. Online condolences may be sent to www.olsonfuneralhome.com

Janice Carol Ramsey, 83, of Fergus Falls, died unexpectedly Thursday, January 2, 2020, at her residence in Fergus Falls. Janice was born January 1, 1937, to Pearley and Lilac (Olson) LaValley in Clitherall, MN. In her early years she grew up... View Obituary & Service Information

The family of Janice Karst Ramsey created this Life Tributes page to make it easy to share your memories.