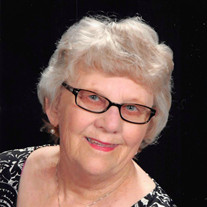 Janet Thelen, 80, of Fergus Falls, died December 9, 2018, at Lake Region Healthcare, Fergus Falls. Janet was born on September 16, 1938 in Minneapolis, MN, the daughter of Walter and Audrey (Carlsen) Will. She grew up in Richfield and graduated from Richfield High School. She met LeRoy Thelen and the couple married on September 2, 1961 in Minneapolis, MN. After their marriage, they lived in the Minneapolis area and then moved to Bismarck, ND, before moving to Fergus Falls in 1977. Janet was an active volunteer at the Otter Tail County Humane Society, a member of Our Lady of Victory Catholic Church for 41 years and also took care of the linens at church for 20 years. She enjoyed ceramics, reading, volunteering with her husband at the Humane Society as well as the Fergus Falls Food Shelf, gardening and travel. She loved to spend time with her children and grandchildren and liked to bake goodies for them. Preceding her in death were her parents; her mother-in-law, Elizabeth and father-in-law, Raymond. She is survived by her husband of 57 years, LeRoy of Fergus Falls; her children, Teresa (Bruce) Tester of Fargo, Kristi (Bob) Schefter of Fergus Falls, Scott (Brenda) Thelen of Rushford; grandchildren, Kaitlyn Thelen, Zachary Thelen, Alyssa Thelen; great-grandchildren, Mallory and Gabriel; brothers, James (Patricia) Will and Richard (Gloria) Will all of Apple Valley. Also surviving are several nieces and nephews, as well as three grand-dogs. Visitation: 5:00 – 7:00 p.m. Thursday, December 13, 2018, at Olson Funeral Home with a public prayer service at 6:30 p.m. Visitation will resume on hour prior to the service at the Church. Mass of Christian Burial: 11:00 a.m. Friday, December 14, 2018, at Our Lady of Victory Catholic Church, Fergus Falls Clergy: Father Alan Wielinski, Father Bill Gamber and Deacon Chuck Kampa Interment: St. Otto’s Catholic Cemetery, Fergus Falls Arrangements provided by Olson Funeral Home, Fergus Falls Online condolences may be sent to www.olsonfuneralhome.com

Janet Thelen, 80, of Fergus Falls, died December 9, 2018, at Lake Region Healthcare, Fergus Falls. Janet was born on September 16, 1938 in Minneapolis, MN, the daughter of Walter and Audrey (Carlsen) Will. She grew up in Richfield and graduated... View Obituary & Service Information

The family of Janet Marie Thelen created this Life Tributes page to make it easy to share your memories.