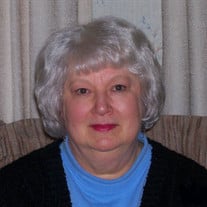 Janet Coleman, 80, of Fergus Falls died Wednesday, December 18, 2019, peacefully at her home under the care of LB Hospice. Janet Kathryn (Drexler) Coleman was born September 3, 1939, to Arthur and Esther (Meyer) Drexler in Herman, MN. She had two sisters, Ardyce and Chleo. She attended Herman High School, graduating in 1957. On January 7, 1958, she married Robert Coleman at St. Charles Catholic Church in Herman. She and Robert made their home in Fergus Falls, Detroit Lakes, and then finally back in Fergus Falls. She enjoyed sewing, cooking, crafts, camping, playing cards, dancing, canning, trips to Fargo, and gardening. Her faith was very important to her, she was a Woman of God, and held many bible studies at her home with Robert. She loved spending time with her grandchildren. She was preceded in death by her parents, Arthur and Esther; sister, Chleo (Lester) Syverson of Alexandria, and children, Brenda in 1959, Jeffrey in 1960, and Julie in 1961. Janet is survived by her husband, Robert of Fergus Falls; daughter, Michelle (Tim Peterson) Mahoney of Rochester; son, Michael Coleman of Fergus Falls; grandchildren, Chelsey (Jakin) Chapman of Portland, OR and Jordan Mahoney of Stewartville, MN; sister, Ardyce (Bill) Vipond of St. Cloud, and several nieces and nephews. Memorials are preferred to LB Hospice. Visitation: One-hour prior to the service at the funeral home. Service: 11:00 a.m. Friday, December 27, 2019, at the Olson Funeral Home in Fergus Falls. Clergy: Chaplain Caleb Larson Arrangements are provided by the Olson Funeral Home in Fergus Falls. Online condolences may be sent to www.olsonfuneralhome.com

The family of Janet Kathryn Coleman created this Life Tributes page to make it easy to share your memories.