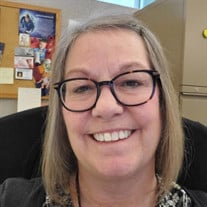 Jane Patricia Meyer, 61, of Underwood, died Friday, July 9, 2021, at Sanford Medical Center in Fargo. Jane Patricia Meyer was born on September 2nd, 1959 to Lawrence and Patricia Haglund in Fargo, North Dakota. As a child she lived for a period of time in California before spending the rest of her childhood in Buhl, MN. She graduated from the Martin Hughs High School there in 1977. Jane began a nursing position at Eventide Lutheran Nursing Home after moving to Moorhead, MN where she met the love of her life, Michael Meyer. They were married in June, 1983. The couple began their married life in the Fergus Falls area, where Jane worked for Otter Tail County, mostly in the accounting department, for nearly 34 years. Jane celebrated her retirement in June of this year. Jane was an exceptional daughter, sister, aunt, mother and grandmother and wife. She treasured relationships with her children and grandchildren and all those who were part of her growing family. Her happiest days were the births of her sons – Daniel (1986) and then Dylan and Tyler (1990). She could talk for hours about their accolades and accomplishments and was especially proud of the love and support they consistently showed for their parents and each other. She never missed an opportunity to get together with any of them, especially if she could get everyone together at the same time. She was always ready with a plan for an outing, an activity, cookie decorating, or making any kind of ‘creative’ mess with the kids she could think up. As her sons grew their families, her role as grandmother brought a new dimension to her increasingly full life! She couldn’t resist spending time and doing activities with her grandchildren Beckett Henry (5), Evelynne Jane (3) and Harlow Gene (10 months). As a special aunt, sister, cousin and godmother, she carried her involvement to her siblings, nieces, nephews and their children through visits, baking “Janie” bread, sending cards and Target cards and attending all extended family celebrations! Jane also had several close friends whose support and friendship over the years meant more to her than she could say. As Jane said, “they understood my quirkiness and liked me anyway.” Jane was the center of our greater family life. The rip left in the fabric of love and joy that she spun around us all caused by her sudden passing will never completely mend. She was loved more than any of us can ever express. Jane was preceded in death by her parents Larry and Pat and a nephew Jeremiah. She is survived by her husband Mike, sons Daniel, Dylan (Chelsey), Tyler (Krystle), and three grandchildren; Beckett Henry (Lauryn, mother), Evelynne Jane, and Harlow Gene. She is also survived by her siblings Greg (Martha), Carol (Rollie), Rick, and John (Denise along with numerous nieces and nephews and a large number of extended family. Jane noted that she was especially grateful to her uncle Kelly for teaching her the value of a quarter for rubbing her feet and her aunt Eloise who took her to her first Disney movie with her favorite cousin Nancy. A private family service for Jane was held. A public visitation for the friends, and people who knew Jane will be held at the Olson Funeral Home in Fergus Falls on Friday, July 23rd, 2021 from 3:00 p.m. to 5:00 p.m. In lieu of gifts, please honor Jane by buying a gift for a child that you love or that is in need. Arrangements are provided by the Olson Funeral Home in Fergus Falls. Online condolences may be sent to www.olsonfuneralhome.com

Jane Patricia Meyer, 61, of Underwood, died Friday, July 9, 2021, at Sanford Medical Center in Fargo. Jane Patricia Meyer was born on September 2nd, 1959 to Lawrence and Patricia Haglund in Fargo, North Dakota. As a child she lived for a period... View Obituary & Service Information

The family of Jane Meyer created this Life Tributes page to make it easy to share your memories.