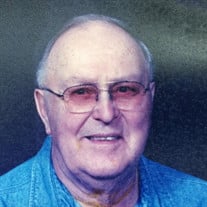 James “Jim” Zurn, 87, a resident of Fergus Falls, passed away Wednesday, December 26, 2018, at LB Broen Home. He was born on February 17, 1931 in Montevideo, Minnesota, the son of Raymond and Mildred (Neal) Zurn. He grew up and attended school, until the 8th grade, in Maynard, Minnesota. This was because he had to stay home and assist with the farming after his father contracted rheumatic fever. This was during the Dust Bowl era. On December 1, 1950, he married Pat Zurn at the Sacred Heart Catholic Church in Murdock. The family lived on a farm in Benson, Minnesota until 1962. They raised dairy cattle and cucumbers which they sold locally. They then moved to a farm south of Fergus Falls. Jim farmed as well as worked in Elbow Lake, Minnesota at an implement dealership. Later Jim was employed at the Farmer’s Feed Mill. Later Jim was employed by Quality Circuits as a janitor. He also worked at Nelson Auto Dealership in Fergus Falls until his retirement. Jim and his wife Pat enjoyed attending flea markets and antiquing with friends. They also enjoyed gardening and working on their yard. Jim enjoyed taking road trips and fishing. Jim entered the Broen Home in 2012 where he lived out the remainder of his life. He is preceded in death by his wife, parents and brother Roger. Survived by his children Mike (Sue) Zurn of Blaine, Jeff (Char) Zurn of Lakeville, Gary (Barb) Zurn of Mendota Heights, Vicky (Darold) Woessner of Ottertail, Cindy (Greg) Marier of Woodbury, Debi (Don) Glasser of Woodstock, Georgia, Tom (Linda) Zurn of Eden Prairie, John Zurn of Richfield, Tony (Rhonda) Zurn of Little Canada, and Jenny (John) Summers of Woodstock, Georgia; 16 grandchildren and 18 great grand-children; brother Odell (Sandra) Zurn of Chanhassen. In lieu of flowers, memorials are preferred to the LB Hospice, 805 East Channing Avenue, Fergus Falls, Minnesota 56537. Visitation: One hour prior to the service at the funeral home. Memorial Service: 11 a.m. Wednesday, January 2, 2018 at Olson Funeral Home Chapel, Fergus Falls, MN. Clergy: Father Alan Wielinski Burial: Will be held in the spring of 2019 at Knollwood Memorial Gardens, Fergus Falls

The family of James Leo Zurn created this Life Tributes page to make it easy to share your memories.