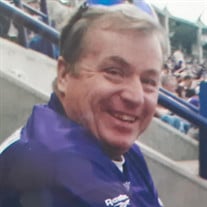 James L. “Swede” Swedenburg Jr., 65, of Fergus Falls, died Thursday, March 31, 2022, at his residence. James Lewis was born July 30, 1956, to James Sr. and Genevieve (Jordan) Swedenburg in St. Paul, MN. He graduated from Tartan High School in Oakdale, MN in 1974. Swede resided in the Twin Cities and was employed by USF Holland as a truck driver. In his earlier years, he traveled over the road and in his later years he drove more locally. His routes took him to the Twin Cities and Southern MN. He retired in 2021 and relocated to Fergus Falls to be close to his family. Swede was a member of the Eagles and Teamsters. He was an OAA Baseball Coach and enjoyed to golf. Preceding him in death were his parents. Swede is survived by his daughter, Katie (Anthony); sons, Michael (Vanessa) and Matthew (significant other, Rose); grandchildren, Jaxen, Kyra, Gabe, Trey, Genevieve, Cecelia, Asher, Ezra, Anthony, and Sonny; step-daughter, Jenna Thorson, and step-son, Luke Thorson. Jimbo we bid you take your place in the halls of Valhalla. Memorial Service: 2:00 p.m., Tuesday, April 5, 2022 at Bethel Lutheran Church in Fergus Falls, with visitation one-hour prior to the service at the church. Clergy: Reverend David Foss There will be a private family Interment. Arrangements provided by Olson Funeral Home in Fergus Falls. Online condolences may be sent to www.olsonfuneralhome.com

The family of James Swedenburg Jr created this Life Tributes page to make it easy to share your memories.