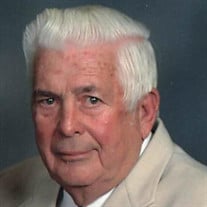 James “Jim” Palmer,92, of Fergus Falls, died Monday, March 21, 2022, at the MN Veterans Home in Fergus Falls. James Seely Palmer was born April 6, 1929, in Duluth, MN the son of Edward and Laina (Liukonen) Palmer. He graduated from Central High School in Duluth after which he began employment with the Wm. H. Ziegler Co., the Caterpillar dealer in Duluth, MN. In February, 1951, he was drafted into the United States Army, taking basic training at Camp Rucker, Alabama, after which he took engineer training in Columbus, Ohio. He was then transferred to Yokahoma Engineering Depot in Japan. He was honorably discharged on January 23, 1953, returning to his employment with Wm. H. Ziegler Co. He was united in marriage to Arlene Pape in Minneapolis, MN on June 11, 1955, making their home in Duluth. In 1962, he was transferred to Albert Lea, MN as a Parts Representative with the Ziegler Company, and in 1964, he was transferred to Fergus Falls, MN as a Territory Manager in which capacity he served for 26 years, retiring in 1990 with a total of 40 years with the Ziegler Company. He was an avid sportsman with his interest being predominately fishing, hunting and trapping. After his retirement, he enjoyed vegetable gardening, having a large garden every year until he was 90 years old. He was a member of Bethlehem Lutheran Church. He also had been an active member of the Fergus Falls Fish and Game Club for decades. James is survived by his wife, Arlene and two sons; namely, Scott (Nancy) of Rock Springs, WY; Gregg of Fergus Falls; grandchild, Ashley Palmer of Laramie, WY; great-grandchildren, Miriam and Nadia of Laramie, WY; sister-in-law, Shirley Palmer of Forrest Lake; sister-in-law, Helen Larson of Northfield, as well as numerous cousins. He was preceded in death by his parents; brother, Lorin; brothers-in-law, Carl and Marvin Pape and Edgar Larson and sister-in-law, Ruth Pape. Visitation: 5:00 p.m. to 7:00 p.m. Monday, March 28, 2022, at Olson Funeral Home in Fergus Falls, with prayer service at 6:30 p.m. Clergy: Reverend Loren Mellum Interment: Bethlehem Cemetery, Fergus Falls, MN Arrangements provided by Olson Funeral Home in Fergus Falls. Online condolences may be sent to www.olsonfuneralhome.com

The family of James Palmer created this Life Tributes page to make it easy to share your memories.