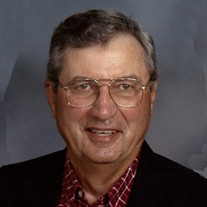 James V. McBride, 89, of Maple Grove, formerly of Pelican Rapids, died Saturday, January 23, 2021, at his home at Silver Creek on Main in Maple Grove. James Vernon McBride, Jr., was born November 10, 1931 in Kenmare, North Dakota to J. Vernon and Aura Bell (Monteith) McBride. He was baptized on August 31, 1939, at the Presbyterian Church in Kenmare, and was confirmed on May 24th, 1955 at First Lutheran Church, Ellensburg, Washington. He grew up in Kenmare, graduating with the Class of 1949 from Kenmare High School. On January of 1951 he enlisted in the Navy. During his tour of duty in the United States Navy, he saw action in Korea. He received his honorable discharge from the Navy in September of 1954, and entered Central Washington College of Education at Ellensburg, Washington, in the field of Optometry. Under the guidance of the Holy Spirit, he made a decision to enter the ministry. The next fall he transferred to Augustana College at Sioux Falls, South Dakota, and received the Bachelor of Arts Degree in Religion and History. In September of 1957, he entered Luther Theological Seminary, St. Paul, Minnesota. He received the Bachelor of Divinity Degree in May of 1960. On June 12th, 1960 he was ordained at Nazareth Lutheran Church in Kenmare. He served as Pastor at Maynard and Wang Lutheran Churches in Maynard from 1960-1965, Vinje Lutheran Church in Willmar from 1965-1969, Our Savior's Lutheran Church in Barnesville from 1969-1976, Bethlehem Lutheran Church in Fergus Falls from 1976-1986, and at First Lutheran Church in Blair, Nebraska from 1986-1994. Pastor Jim retired from full time ministry in 1994 and moved to his Lake Lida home in Pelican Rapids. He continued to serve multiple churches as an interim Pastor in his retirement. Over the years, Jim served on numerous boards for hospitals, nursing homes, Bible Camps, archery organizations, and hunting groups. While in Pelican Rapids, Jim was a member of the Rotary Club and Zion Lutheran Church. He was inducted into the North Dakota Goose Hunters Hall of Fame in 1999 and was honored with the Archery Lifetime Acheivement Award in 2014. Jim enjoyed hunting, fishing, archery, golfing, history, telling stories and spending time at the lake. He will be remembered for his deep faith, his gift of prayer, his wonderful sense of humor, and his love of family and friends. He is survived by his son, David (friend, Kathy) McBride of Lakeville; daughter, Diane (Rev. Dave) Nelson of Annandale; daughter-in-law, Gail McBride of Canby; eight grandchildren: Angie (Bob), Joshua (Alicia), Andy (Mindy), Andrea (Nathan), Kevin (Katie), Katie (Benn), Kayla (Garrett) and Molly (Troy); 13 great-grandchildren; his sister, DeNee Hanson of Fort Dodge, IA; and nieces, nephews, and countless friends. He was preceded in death by his parents, Vernon and Aura Bell McBride; sons, Curtis McBride in 1998 and Paul McBride in 2020; sister, Sally Thompson; brothers-in-law, Paul Thompson and Roger Hanson, and nephews, Rolf Thompson and Kirk Hanson. Service: 11:00 a.m. Saturday, June 19, 2021, at Zion Lutheran Church rural Pelican Rapids, MN Clergy: Reverend David Nelson Interment: Lakeview Cemetery, Kenmare, North Dakota Arrangements are provided by the Olson Funeral Home in Fergus Falls, MN Online condolences may be sent to www.olsonfuneralhome.com

The family of James McBride created this Life Tributes page to make it easy to share your memories.