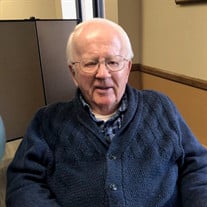 James Joseph McDonald died on October 31, 2020. Born on February 29, 1932, in Austin, Minnesota to Ellen Thomson McDonald and Arthur Benedict McDonald, Jim was the fourth of seven children. He graduated from St. Augustine (now Pacelli) High School in Austin and went on to earn a Bachelor of Arts degree in English at St. John’s University in Collegeville and Master of Arts degree in English at Columbia University in New York. His first teaching job was at the high school in Adams, Minnesota where he taught for six years. He then spent two years working in Boston, Massachusetts as the administrator of St. Paul’s Rehabilitation Center For The Newly Blinded. In 1963 he moved to Fergus Falls, where he taught English and directed Theater at Roosevelt High School. Three years later, he took a position at the Fergus Falls Community College, where he taught English and Speech and directed Theater for nearly thirty years, until his retirement in 1995. On June 10, 1967, he married Mary Ann Handsuch at the Most Holy Redeemer Catholic Church in Montgomery, Minnesota. During his years at the FFCC, Jim was the director of the community summer musical theater program. For nearly two decades, thousands would come to Wesley A. Waage Theater each summer to enjoy classic musicals such as The Sound of Music, Oklahoma!, and The Pirates of Penzance, and to be entertained by the best performing talent in the region. Jim was a gentle and kind man who could start and hold a conversation with just about anyone. He possessed a subtle dry wit, was good humored, and rarely spoke badly of others. Jim was a devoted husband, father, and Poppa (grandfather), respected, enjoyed, and beloved by his entire family. Jim is survived by his wife, Mary Ann McDonald; his four daughters, Katherine Thunborg (Loren), Elizabeth Adams (John), Ann McDonald, and Margaret McDonald (Chris Jessen); his son, Matthew McDonald; seven grandsons, Christopher (Taylor), Isaac, and Alex Adams, Nicholas and Andrew Thunborg, Leo and Henry McDonald; granddaughter, Cecilia Adams; great-granddaughter, Maren Adams; two brothers, Robert and Don (Barb); and his faithful friend and colleague, Lee Krogh. He was preceded in death by his parents, Ellen and Arthur; his infant son, Peter James; his brothers, Art and Charles; his sisters, Frances Larkoski and Pat Patterson; and his daughter-in-law, Jessica Berson. A private family service will be held. Please refer to Jim's Tribute Wall for a link to the Live-stream of the service on Saturday, June 5, 2021, at 1:00 p.m. Burial will be at St. Otto’s Cemetery. Donations in Jim’s memory can be made to Alzheimer's Association, The Multiple Sclerosis Society, and METAvivor (metastatic breast cancer research). Arrangements are provided by the Olson Funeral Home in Fergus Falls. Online condolences may be sent to www.olsonfuneralhome.com

The family of James "Jim" McDonald created this Life Tributes page to make it easy to share your memories.