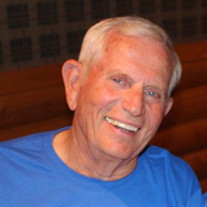 James Knight Johnson, 80, of Fergus Falls passed away at Evansville Care Center on September 28, 2021. Jim was born to Kirtel and Evelyn Johnson in Fergus Falls on April 25, 1941. He was the youngest of four children and, as the only boy, he often remembered being both “spoiled” and a source of “playful irritation” throughout his childhood. Jim graduated from Fergus Falls High School in 1959. He enjoyed participating in a variety of sports and activities at FFHS, and he appreciated developing a number of friendships that continued throughout his lifetime. Following high school, Jim was united in marriage to Barbara Johnson. They were blessed with three children, Patrick, Debbie and Tim, whom they raised on Wright Lake in Fergus Falls. All three of the kids were outstanding swimmers, and Jim, so proud of their accomplishments in and out of the pool, was active in supporting their endeavors through the youth, high school and college years. Jim married Nancy Wasberg in 1984, and they continued to reside in Fergus Falls until health issues necessitated his move to the care facility. Jim and Nancy loved on kids, grandkids and extended family members, they worked the state fair together, they wintered in Arizona, and they had many enjoyable travel adventures throughout their more than 37 years of marriage. They enjoyed just being together, sharing daily games of Scrabble and Gin, and they treasured the simple gift of being able to hold one another’s hand. Jim served in the Minnesota National Guard for six years following high school, and he worked a variety of jobs over the course of his life, as well. As a teenage boy he began selling “about a foot long” hot dogs with his father at the Minnesota State Fair. Jim’s love of the state fair was central in his life until almost the very end. He was grateful for the opportunity to introduce his sons to the fair when they were young boys, and eventually brought them into the operation. One of the other loves in Jim’s life was the game of golf. He enjoyed decades of friendly competition with the guys at Pebble Lake Golf Course, and played many rounds with son Patrick, with his step-sons, and with special extended family members throughout the years, as well. Whether it was Pebble Lake, an Arizona course, or even Pebble Beach, Jim hit the driver down the middle and made more than his share of putts as he enjoyed both the game and the fellowship. Jim was a life-long member of Our Lady of Victory Catholic Church in Fergus Falls. He was baptized in May of 1941, and he continued to enjoy Mass at OLV throughout his life. He particularly enjoyed singing in the OLV choir through many of those years, as well. Jim is survived by his wife, Nancy; children, Patrick (Stephanie), Deb and Timothy (Danie); step-children, Chris (Joni) Wasberg, Peter Wasberg and Wendy (Marc) Terris; grandchildren, Luke and Sydney Johnson, Hans and Annika Johnson, Emma, Grace and Hannah Johnson, Samuel (Abby) Wasberg and Emma, Luke, Sophia and Matthew Terris; great-grandchild, Isak Wasberg; sisters, Kathy (Bill) Egan, Margy (the late Peter) McCarron and Rosey (John) McGuire; in-laws, Mary (Tom) Thomas, Bruce (Nancy) Thorson and Robin (Kevin) Sweeney, and numerous nieces and nephews. BLESSED BY THE MEMORY OF JIM JOHNSON Memorial Service: 11:00 a.m. Wednesday, October 6, 2021, at Olson Funeral Home in Fergus Falls, with visitation one-hour prior to the service at the funeral home. Clergy: Deacon Chuck Kampa Interment: St. Catholic Otto’s Cemetery, Fergus Falls, MN Arrangements are provided by the Olson Funeral Home in Fergus Falls. Online condolences may be sent to www.olsonfuneralhome.com

James Knight Johnson, 80, of Fergus Falls passed away at Evansville Care Center on September 28, 2021. Jim was born to Kirtel and Evelyn Johnson in Fergus Falls on April 25, 1941. He was the youngest of four children and, as the only boy,... View Obituary & Service Information

The family of James "Jim" Johnson created this Life Tributes page to make it easy to share your memories.

James Knight Johnson, 80, of Fergus Falls passed away at Evansville...