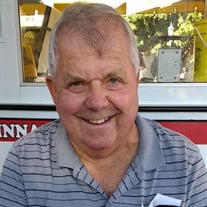 James “Jim” Greff, 78, of Fergus Falls, died Sunday, April 10, 2022, after a brief battle with pancreatic cancer. Born in St. Croix Township near Regent, ND, in 1943, Jim grew up on a farm in rural Regent. He attended Cherry Butte School through the eighth grade, and then boarded at St. Mary’s Catholic School in New England, ND, for two years of high school. Regent began bussing students in his junior year and he graduated from Regent High School in 1961. After graduating Jim joined the Navy and was honorably discharged in 1964. After the Navy Jim held a variety of jobs, including in manufacturing, working in jewelry stores, manager in a night club and co-owner of a bar, owner of a doughnut shop, and many others. It was when he took a job as custodian at Regent Public School that he found his true calling. Many people remarked on how clean the school was while Jim worked there, and it seemed he could fix nearly anything, including the kids’ broken eyeglasses. After leaving the school, he frequently returned to the custodian/maintenance line of work, taking jobs at the Good Samaritan Home in Mott, the Kelly Inn in Fargo, Townhomes of Pelican Rapids, and his last job, Riverbend Apartments in Fergus Falls. Jim fully retired in 2017. Regardless of where Jim worked, he exhibited a passion for working hard and doing a job well, which he passed on to his sons. Family was extremely important to Jim, and although his siblings lived in different locations, he often traveled to visit them. Jim was preceded in death by his parents, Gabriel Jr. and Catherine (Selinger). Jim is survived by his wife Robin (Madson) and his sons Jason (Sarah) and Lance; sisters Carol (Ken) Biddle, Linda (Ken) Evenson, Cindy (Dan) Reinbold, and Patty (Dale) Wanner; brothers Richard (Clara) and Don (Georgine); the mother of his sons Rita (Martin); stepchildren Andrea Mayer and Ben (Dani) Kappel; mother-in-law Helen Madson and sister-in-law Susan Madson. Memorials are preferred to Hospice of the Red River Valley. Celebration of Life: 2:00 p.m. Saturday, April 23, 2022 at Olson Funeral Home, Fergus Falls, MN, with visitation one-hour prior to the service. Please bring a story or memory of Jim to share. Clergy: Reverend David Strom Interment: Regent Cemetery, Regent, ND at a later date Arrangements provided by Olson Funeral Home in Fergus Falls. Online condolences may be sent to www.olsonfuneralhome.com

The family of James "Jim" Greff created this Life Tributes page to make it easy to share your memories.