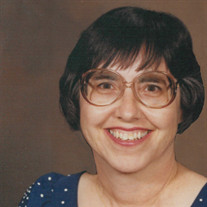 On January 15, 2019, Iris died at home at age 86. Iris Arlene Jacobson was born to Roy and Marian (Cummings) Keepers on May 7, 1932. Around this time, the Keepers family moved from the coal-smoky air of Chicago to a small log cabin farm in Westboro, Wisconsin, with Iris and her two brothers, Ken and LeRoy - also known as “Uncle Bun.” Iris attended a country school and read all the school’s library books before she finished sixth grade. Farming was no fun for Iris and she left behind milking cows and preparing meals for farmhands. She left home after graduating high school to live with a cousin in Fergus Falls. While waiting tables at the Maid Rite Café she met her true love of more than sixty years, Dean Jacobson, a young electrical engineer working for Otter Tail Power Company. They married in September 1951. Iris and Dean bought their first home in Fergus Falls after three years of apartment living. In these early years she was a fierce protector of her daughter, Debra, staying three months at the University of Minnesota Hospital in 1959 to save her life from a brain tumor with the latest form of surgery. Her other daughters Diana and Betty stayed home to suffer through Dean’s strange cooking of sloppy joes with cinnamon sticks. In 1960, the birth of their fourth daughter Bonnie made the family complete. Iris's house was a home for the whole neighborhood, where children could come and eat boxes of sweet rolls, choose from stacks of board games, learn to skate, run around, play, and make a mess. She was a leader of Blue Bird and Campfire Girls clubs, a Sunday school classroom teacher, a school fundraiser and host for political party events, and a ceaseless supporter of the Fergus Falls Public Library throughout the 1960s, raising the children of the town on a love of games, books, learning, and volunteering. In 1965, Iris and Dean purchased 300 feet of shoreline on the south side of West Battle Lake and built their dream home, a five-bedroom cottage designed to host dozens of friends and family members. Over the next half century, the lake cottage played host to family reunions, birthday parties, holidays, and even Debra’s wedding to her husband Ross. At the lake, Iris raised thousands of flowers (and occasionally, a few vegetables) in overflowing gardens. In those years Iris also became adept at bird-watching, crossword puzzles, and BB gun shooting to discourage the chipmunks and rabbits. Iris left the lake cottage and a piece of her soul behind in 2013, but ensured that the home was sold to a new family that would continue filling it with games, play, and fun. When her daughter Debra needed a job after college, she and Iris opened the doors of the Jacobson Daycare in 1979. They raised children, including Iris's grandsons, for thirty years until her retirement in 2009. She went all out for her kids, making endless lunches of corn dogs, pizzas, and pancakes on a stick, with syrup. Their days were filled with stories, songs, puzzles, games, costumes, lessons, walks to the park, sand castles, and sunshine. To this day, they still get invites to the weddings of the children they helped to raise. Iris lost her husband in 2013 after a long battle with Alzheimer’s disease. After he died, she spent her remaining years living with her daughter, son-in-law, and Dean’s best friend, the 100 pound goldendoodle, Buddy. With the help of beloved friends and neighbors, she continued to plant her gardens and grow flowers, and maintained an independent life at home, most recently renovating her bedroom. She kept in touch with her growing family across the country, now extending down to great-grandchildren who she loved dearly. She is preceded in death by her husband, of 61 years, Dean Jacobson, Jr.; parents, Roy and Marian Keepers and brother, LeRoy “Bun” Keepers. Iris is survived by her brother, Kenny (Marion) Keepers; sister-in-law Virginia Keepers; daughters, Diana (Doug) Johnson, Debra (Ross) Jacobson-Deeley, Elizabeth Jacobson (Jim Burke), and Bonnie (Rick) Mayfield; grandchildren, Kimberly (Mark) Petrosky, Victoria Isherwood, Elijah Mayfield (Brittany McLaughlin), and Thaddeus Mayfield; great-grandchildren, Anders, Elin, and Dane Petrosky and Bryce and Campbell Isherwood; and the hundreds of children and their families that she has raised in Fergus Falls throughout her life. Visitation: One hour prior to the service at the funeral home Memorial Service: 1:00 p.m., Monday, January 21, 2019, at Olson Funeral Home Chapel, Fergus Falls Clergy: Reverend Gretchen Enoch Interment: Fort Snelling National Cemetery, Minneapolis, Minnesota Olson Funeral Home in Fergus Falls is in charge of the arrangements. Condolences may be sent online at www.olsonfuneralhome.com

On January 15, 2019, Iris died at home at age 86. Iris Arlene Jacobson was born to Roy and Marian (Cummings) Keepers on May 7, 1932. Around this time, the Keepers family moved from the coal-smoky air of Chicago to a small log cabin farm in... View Obituary & Service Information

The family of Iris A Jacobson created this Life Tributes page to make it easy to share your memories.