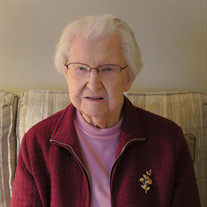 Former Fergus Falls area resident, Ida Mae Loomer Fabian, age 99, died January 11, 2021 in the N. C. Little Hospice House in Edina, MN. She was born Nov. 11, 1921 in Western Township, Otter Tail County, MN, the daughter of Charles and Minnie (Neumann) Loomer. She was baptized in the Western Presbyterian Church. Ida Mae grew up in this area attending country school and graduating from Fergus Falls High School in 1939. She then moved to Minneapolis and did secretarial work for Gamble-Skogmo Co. for the next four years. She married Charles W. Fabian October 23, 1943 in Fergus Falls. They made their home on the farm in Western Township for the next 50 years. In 1994 they moved into Fergus Falls. Charles died in 2004. Ida Mae remained there until 2015, moving to Bloomington MN to be near family. She was a faithful member of what is now the Church of Peace United Methodist Church of Fergus Falls, serving in numerous offices. She was also an officer in the state Women’s Missionary Society for 13 years. After retirement, Charles and Ida Mae enjoyed extensive travel with family, both in the U.S. and abroad. They also took bus trips with friends. Ida Mae began writing essays about family and life as she had lived it. This became a legacy to her loved ones. Music was a very integral part of every day, either playing piano, singing, or listening to CD’s. She was an avid reader and, after becoming legally blind, listened to about 950 books, courtesy of the Minnesota Braille and Talking Book Library and the National Library Service for the Blind. She was preceded in death by her parents, her husband of 61 years Charles, and eleven half-siblings: Walter, Raymond, Merle, and Francis Loomer, Iva (Loomer) Vollbrecht, Hazel (Loomer) Will, and Inez (Loomer) Shoemaker; Bert, Ralph, and Ted Vollbrecht and Marie (Vollbrecht) Thurston. She is survived by daughter Sandra (Kenneth) Enstrom of Bloomington, MN; one grandson Christopher (Amanda) Enstrom and two great-grandsons Joshua and Lucas of Inver Grove Heights, MN; as well as numerous nieces and nephews. Service: 2:00 p.m. Thursday, June 17, 2021, at the Olson Funeral Home in Fergus Falls, with visitation one-hour prior to the service at the funeral home. Please refer to Ida Mae’s Tribute Wall for a link to the Live-stream of the service. Clergy: Reverend Doctor Douglas Dent Interment will be at Knollwood Memorial Gardens. Memorials are preferred to the Minnesota Society for the Blind, 2200 University Ave W. #240, St. Paul, MN 55114 Arrangement provided by the Olson Funeral Home in Fergus Falls. Online condolences may be sent to www.olsonfuneralhome.com

The family of Ida Mae Fabian created this Life Tributes page to make it easy to share your memories.