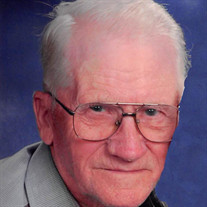 Henry Donald Budke, known by most as Don, died peacefully at Pioneer Care Center on Thursday, March 31, 2022. (Henry) Donald was born September 5, 1932, the fourth of nine children born to Alida Budke (Gilbertson) and Henry Budke in Friberg Township, Minnesota. He attended a country school until completing the eighth grade when he began a life-long career in agriculture. On January 15, 1953, (Henry) Donald Budke married Kathleen Mary Schneider at St. Joseph’s Catholic Church, Foxhome, Minnesota. Together Don and Kathleen raised thirteen kids on their farm near Phelps Mill in rural Otter Tail County, Minnesota, where Don was a full-time farmer in addition to a variety of other occupations, including driving a milk truck, working at the lumber yard in Underwood, and roofing and insulating homes with a neighboring farmer, Orris Skogen. Don lived a life deeply rooted in Christian faith, honesty, integrity, and belief in the value of hard work. He would sometimes speak with regret about his unfinished education, messy handwriting, and inability to remember how to spell words correctly, but he never forgot a face. Until recent years, he held a detailed map of the majority of central Minnesota in his head and could name who farmed where (or had years ago), how to get there most efficiently, and the best way to turn around in the yard while pulling a loaded gooseneck stock trailer. While Don’s life was devoted to his wife and family, he always made time for someone in need, whether it be a young couple who lost everything in a house fire or those looking for freedom and peace in a new country. He shared the fruits of his labor generously with those who needed it or simply because, as a child of the Great Depression, he couldn’t bear to see anything go to waste. His nature was peaceful, and he could strike up a friendly conversation with complete strangers anywhere, but he was also willing to challenge what he didn’t believe was right. He was an inveterate tease, enjoyed playing cards and dancing, liked to deer hunt and fish year-round but mainly as an opportunity to socialize with family or neighbors. (Henry) Donald was preceded in death by his wife Kathleen and siblings Ann, Roy, Myrtle, Mervin, Rosemary, Marcella, and Jerry. He is survived by his sister, Joann Kugler; thirteen children, Dale, Mitzi, Laure (LaFond), Tim, Bob, Julie (Scott), Kris, Nancy (Grovum), Beth (Waller), Karen (Taylor), Jon, Patrick, Dominick; fifty-three grandchildren, sixty-four great-grandchildren, and one great-great-granddaughter. Closed Casket Visitation: 5:00 p.m. to 7:00 p.m. Sunday, April 3, 2022 at Saint James Catholic Church, rural Underwood, with prayer service at 6:30 p.m. Visitation will resume one-hour prior to the service on Monday. Mass of Christian Burial: 11:00 a.m. Monday, April 4, 2022 at Saint James Catholic Church, rural Underwood Clergy: Father Jon Budke, Father Leroy Schik, and Father Alan Wielinski Interment: Saint James Catholic Cemetery, rural Underwood, MN Arrangements provided by Olson Funeral Home in Fergus Falls. Online condolences may be sent to www.olsonfuneralhome.com

The family of Henry "Donald" Budke created this Life Tributes page to make it easy to share your memories.

Henry Donald Budke, known by most as Don, died peacefully at...