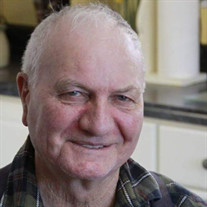 Harvey Clarence Moen, 85, of Fergus Falls, passed away unexpectedly on Friday, June 5, 2020. Harvey was born at home in Maplewood township on December 17, 1934, to Carl and Hilda (Halverson) Moen. Grandma Moen said she never had to worry about where Dad was. She just had to listen because he was always singing or whistling. He was baptized and confirmed at Maplewood Lutheran Church. Harvey joined the United States Marine Corps July 1957 and was honorably discharged August 1959. He was proud of his service and would tell you “Once a Marine, Always a Marine.” Harvey met the love of his life at the county fair. Shirley Ann (Clausen) and Harvey were married October 15, 1960. David Harvey was born January 30, 1961 and Denise Marie March 13, 1965. Harvey worked as a pinsetter at the bowling alley as a kid, Ray Krog Trucking, Federal Cartridge Corporation, Stan Morrill Construction, as a stationary steam engineer for the City of Fergus Falls, and Ripley’s Incorporated. Harvey was known for his strong work ethic. He was known as a humble, kind, gentle Norwegian by all who met him. Harvey was always willing to help. He could fix, build, and repair almost anything. If he didn’t know how to fix something, he would read a book to learn. He was an avid reader, Louis L’amour and history were his favorites. He loved nature and any of God’s creatures. He hunted ducks and deer, but it was more for the comradery of his hunting partners than anything else. A few of his favorite things were hiking, whittling, woodworking, fishing, and long country drives with Shirley by his side. Harvey’s greatest joy in life was children. He was like a magnet to kids, anything he did was “cool.” Generations have been treated to his love and teasing. He wore the title of Grandpa and Papa Harvey with tremendous pride. Harvey is survived by his wife of 59 years, Shirley Ann (Clausen) Moen of Fergus Falls; son, David (Lisa) Moen of Bedford, TX; daughter, Denise (David) Anderson of Fergus Falls; grandchildren, Angel Flud, Whitney (Charles) Hynes, Ben (Ashley) Moen, Tait Anderson, and Korey (Brittany) Anderson; great-grandchildren, Christian Green, Jack Hynes, Hannah Anderson, and Clara Anderson; brothers, Kenneth and Clifford Moen; sisters, Faye Nehk and Pam (Pius) Marquart; brothers-in-law, Soren Kugler and John Clausen; sisters -in-law, Dorothy Moen, Julie Moen, Mavis Kugler, and Elaine Avilla; many nieces and nephews, and special friend since childhood, Earl (Bud) Severson. Preceding him in death were his parents, Carl and Hilda Moen; mother and father-in-law, Erna and Erdwig Clausen; brothers, Ernest, Walter, and Lester Moen; sister, Helen Richter; brothers-in-law, Earl Johnson, Gerald Richter, Danny Nehk, and Joe Lopez; sisters-in-law, Joan Moen, Wilma Johnson, and Joyce Clausen. A graveside service will be held at 2:00 p.m. on Saturday, June 13, 2020 at Maplewood Lutheran Cemetery. The public is welcome. Clergy: Reverend Brad Soenksen Condolences can be sent to the family in care of Shirley Moen at 643 W. Laurel Fergus Falls, MN 56537. SEMPER FIDELIS Arrangements are provided by the Olson Funeral Home in Fergus Falls. Online condolences may be sent to www.olsonfuneralhome.com

Harvey Clarence Moen, 85, of Fergus Falls, passed away unexpectedly on Friday, June 5, 2020. Harvey was born at home in Maplewood township on December 17, 1934, to Carl and Hilda (Halverson) Moen. Grandma Moen said she never had to worry about... View Obituary & Service Information

The family of Harvey Moen created this Life Tributes page to make it easy to share your memories.