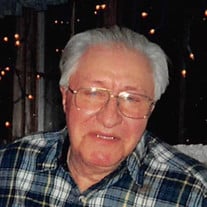 Harvey Robert Grasshoff, 93, of Fergus Falls, died Monday, December 2, 2019, at Knute Nelson Memorial Home in Alexandria. He was born on May 30, 1926, in Maine Township, by Underwood, Minnesota. He was the son of William A. Grasshoff and Martha (Pommereing) Grasshoff. Harvey was baptized and confirmed at the Immanuel Lutheran Church in Friberg Township. As a young boy he worked and helped out on the family farm. As a child he attended School District #121 Forest Lake School for eight years. After that he attended Dunwood Institution of Technology in Minneapolis for two years, where he graduated with a degree in reading legal land descriptions and welding. He was married to Elna Martha Beske on November 26, 1952, Thanksgiving Day evening, at St. John’s Lutheran Church in Elizabeth, MN. After their marriage they farmed his family farm in Maine Township by West Lost Lake. To this union was born five children, two girls and three boys. Elna passed away on October 5, 1970. In 1957, he worked as a service man for the Massey Harris Tractor and Combine Company. In 1959, he started working for Montana Flour Mills as a Miller. He worked for the flour mills for 34 years, until he retired in 1993. He retired from farming in 1998 and moved to Fergus Falls, where he worked for Century 21 Realty. He installed and maintained realtor estate signs until retiring again. On July 4, 1980, he married Jeanette Mary (Blazek) Weinkauf of Lidgerwood, ND. They were married at the catholic church in Mooreton, ND. They both decided to get married a second time (each having lost their first spouse) because they enjoyed each other’s company and going to dances. Harvey enjoyed deer hunting and duck hunting in the fall. He also enjoyed fishing and ice house spearing. He was preceded in death by his parents; two brothers, Art and Carl; his first wife, Elna; a step-son, Sidney Weinkauf, and a step-son-in-law, Michael Glas. Harvey is survived by his wife, Jeanette; five children and their families, Lynette (Gordon), Gary, and Curtis Pederson of Alexandria, Marilyn (Steven), Janell, Jeremiah, and Ruth Inwards of Parkers Prairie, Paul Grasshoff of Underwood, David (Sue), Bryan, Kayla, and Jason Grasshoff of Ashby, and Timothy Grasshoff of Underwood; four step-children and their families, Louise(Calvin) Dosch of Wahpeton, Jody (Vicki), Dustin, Zachary Weinkauf of Minneapolis, Brenda, Jarvis, and Austin Glas of Fergus Falls, Connie Weinkauf and Hannah Knutson of Fergus Falls, and 13 great-grandchildren. Mass of Christian Burial: 11:00 a.m. Friday, December 6, 2019, at Our Lady of Victory Catholic Church in Fergus Falls. Clergy: Father Alan Wielinski, Deacon Chuck Kampa, Father Bill Gamber Interment: First Lutheran North Cemetery, Fergus Falls Arrangements are provided by the Olson Funeral Home in Fergus Falls. Online condolences may be sent to www.olsonfuneralhome.com

Harvey Robert Grasshoff, 93, of Fergus Falls, died Monday, December 2, 2019, at Knute Nelson Memorial Home in Alexandria. He was born on May 30, 1926, in Maine Township, by Underwood, Minnesota. He was the son of William A. Grasshoff and Martha... View Obituary & Service Information

The family of Harvey Grasshoff created this Life Tributes page to make it easy to share your memories.