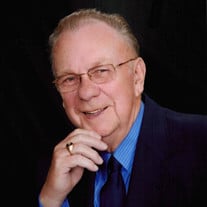 Harvey Albert Engelmeier, 84, a resident of Fergus Falls, died Tuesday, September 29, 2020 at the Fargo VA Hospital, Fargo, ND. Harvey was born April 24, 1936, in Albany, MN to Albert and Pauline (Eiynck) Engelmeier. He graduated in 1954 from Albany High School. This included an award in 1950 of being named Albany School’s spelling champion. In October of 1954, Harvey enlisted in the United States Army. He had his basic training at Fort Leonardwood, MO. He was given specialized training to learn to operate large machinery such as 5-ton dump trucks, bulldozers, and cranes. He was then transferred to the 97th Engineers Battalion which was stationed in Toul, France. His title was Construction machine Operator-CODE 612-10. He has stated one of his most cherished stories, was that he and his brothers assisted in building the parking lot under the Eiffel Tower in Paris, France. He was also in attendance during the wedding of Prince Rainier and Grace Kelly in the country of Monaco. In total he served eight years being honorably discharged in October 1962 attaining the rank of Specialist Third Class. Harvey married Arlene Safar in 1976 and was married for 32 years until her death in November of 2008. During their time together they enjoyed traveling to various parts of the United States and Canada, including the parliament in Ottawa, Ontario. During this time Harvey was employed at Waldorf Paper Company (Waldorf Corp) for a duration of 37 years with the title of Manager of the Shipping Warehouse. He enjoyed his responsibilities as a forklift driver and loading semitruck trailers. Harvey personally loaded the trucks containing the special edition printed Wheaties boxes for both the 1987 and 1991 Minnesota Twins Championships. Harvey and Arlene chose Fergus Falls, MN as their retirement community. Harvey met LeRayne (Patron) Harnack in April of 2010 while buying Easter bouquets. They were married in June of 2011. Harvey’s favorite activities included traveling, fishing, and watching documentaries of history and archaeology. One of his passions included cooking and baking, creating special recipes that everyone enjoyed. Family members preceding him in death were his parents, Albert and Pauline Engelmeier; three brothers, Linus, Pat, and Daniel Engelmeier; one sister, Myrna S. Oehrlein, and his first wife, Arlene (Safar) Engelmeier. Harvey is survived by his wife, LeRayne Engelmeier of Fergus Falls; a son, Donald (Layd) Engelmeier of Athens, Greece and their daughters, Tanya and Daniella Engelmeier; siblings, Larry Engelmeier of Robbinsdale, MN, Cletus Engelmeier of Sandstone, MN, Mary Jane Engelmeier of Hastings, MN, and Louann Engelmeier of Melrose, MN; step-son, Christopher (Julianne) Harnack of Crystal, MN and their children, Kaylee, Isaac, Aaron, and Ameelia Harnack, and several brothers and sisters-in-law, nieces, nephews, and cousins. Harvey will have his interment at the Ogema Community Cemetery in Ogema, MN next to his former wife, Arlene. Blessed be the memory of Harvey Engelmeier! Service: 11:00 a.m., Saturday, October 17, 2020, at Bethel Lutheran Church in Fergus Falls, MN. Clergy: Reverend Ed Monson Military Participation: Fergus Falls V.F.W. Post 612 and American Legion Post 30. Interment: Ogema Community Cemetery, Ogema, MN. Arrangements are provided by the Olson Funeral Home, Fergus Falls, MN. Condolences may be sent online at www.olsonfuneralhome.com

The family of Harvey Engelmeier created this Life Tributes page to make it easy to share your memories.