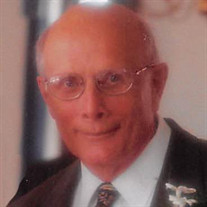 Harry Kiel entered into the presence of God on Wednesday, May 22, 2019, at the age of 95, in Fergus Falls, Minnesota. Harry Kiel was born on October 6, 1923. He was the third of seven children born to Garrit and Grace (Schutte) Kiel of Milo Township, Mille Lacs County, Minnesota. Harry worked for Northwestern Bell Telephone in Minneapolis, Minnesota, before he retired in 1983. During the years of World War II, he was stationed at Ft. Leavenworth, KS working at the Command and Staff School for the Army. In retirement, Lorna and Harry lived at Mille Lacs Lake, Minnesota; in Sarasota, Florida; and in Fergus Falls, Minnesota. On October 4, 1947, Harry married the love of his life, Lorna A. Wessman of Milaca, Minnesota. He was a devoted and loving husband, father of three daughters, grandfather of six and great grandfather to 19. In 2017, Harry and Lorna commemorated their 70th wedding anniversary with a special family celebration. The couple had a strong relationship between themselves and with God. Even throughout all their years together, they held hands at night, during their prayer times, and whenever they heard "The Lord's Prayer," a song sung at their wedding. Harry led a life with God at the center. Although retired early from Northwestern Bell Telephone, he remained active as an involved layman of the Christian and Missionary Alliance Church, serving the Lord he loved. He was chosen Layman of the Year with the Christian and Missionary Alliance (C&MA) in 1990. Harry traveled throughout the United States conducting seminars, and he has served on many denominational committee assignments, including the C&MA Board of Higher Education. Harry has always been interested in Christian education. He served on the Board of Trustees of Crown College, Collegeville, Minnesota, for 22 years and chaired the Board for six years. He and his wife Lorna established an on-going scholarship at Crown College for students interested in missions. Harry is survived by his wife Lorna and by daughters Susan (David) Hall of Poneto, Indiana; Kathleen (Thomas) Black of Arden Hills, Minnesota; and Beverly (LaWayne) Rogness of Fergus Falls, Minnesota; six grandchildren, Keith (Cassandra) Hall of Columbus, Indiana; Heidi (Kristofor) Erickson of Foreston, Minnesota; Peter (Rebecca) Black of Wesley Chapel, Florida; Darren (Sarah) Rogness of Moorhead, Minnesota; Douglas (Jane) Rogness of Moorhead, Minnesota; and Donavan (Rachel) Rogness of Fergus Falls, Minnesota; 19 great-grandchildren; and sisters-in-law Stella Kiel and Loree Kiel Vanman. He was preceded in death by his parents, Garrit and Grace Kiel, brothers Steve (Loraine) Kiel, Dick (Marion) Kiel, John Kiel, Lester (Edythe) Kiel, and Kenneth Kiel and baby sister Anna Kiel. "Well done, thou good and faithful servant. Enter thou into the joy of thy Lord". Matthew 25:21 In lieu of flowers, the family requests donations be made to Big Sandy Bible Camp, McGregor, Minnesota, or Crown College, Collegeville, Minnesota. Visitation: 4 to 6 p.m. Monday, May 27, 2019 at the Olson Funeral Home, Fergus Falls, MN. Burial: Forest Hill Cemetery, Milaca, MN Arrangements are provided by the Olson Funeral Home, Fergus Falls, MN.

Harry Kiel entered into the presence of God on Wednesday, May 22, 2019, at the age of 95, in Fergus Falls, Minnesota. Harry Kiel was born on October 6, 1923. He was the third of seven children born to Garrit and Grace (Schutte) Kiel of Milo... View Obituary & Service Information

The family of Harry Kiel created this Life Tributes page to make it easy to share your memories.

Harry Kiel entered into the presence of God on Wednesday, May...