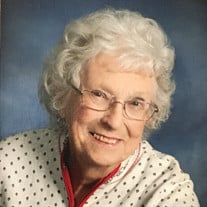 Harriet Fjestad, 89, of Fergus Falls, passed away on Friday, July 17, 2020, at Lake Region Healthcare. Harriet Irene Swendsrud was born in Fergus Falls on June 8, 1931, to Chester and Norma (Bergerud) Swendsrud. She grew up on the family farm southwest of Dalton near Ten Mile Lake and was baptized and confirmed at Ten Mile Lutheran Church. She attended country school at District 7 in Tumuli Township and graduated from Fergus Falls High School in 1949. On September 3, 1949, Harriet married Norman Fjestad at Our Savior’s Lutheran Church in Dalton. They moved to a new house on the Fjestad family farm in Carlisle and were blessed with two children: Steven born in 1950 and Greg born in 1951. In 1960, they moved into the “big house” on the farm when Norm’s parents retired and moved to Carlisle. Harriet was a homemaker and helper on the farm until her and Norm retired from farming in 1982. In 1972, Norm and Harriet bought a lake cabin on Pickerel Lake about 30 minutes from the farm. This became one of Harriet’s favorite places, harkening back to her days growing up by Ten Mile Lake. They spent nearly every weekend during the summer at the cabin and entertained hundreds of people over the years, including an annual Fourth of July potluck. She was always willing to fry up one of Norm’s freshly-caught Pickerel Lake walleye. In late 1982, Norm and Harriet moved into Fergus Falls where Harriet worked part-time at Hylden Industries, laundering at the Broen Home, and cleaning houses with her sister Norita. She also volunteered regularly at the Lake Region Hospital Gift Shop. After Norm’s passing in 2014, she moved into the Sheridan House and later moved to Alcott Manor. In the spring of 2019, she moved to Pioneer Cottages after her dementia continued to progress. Harriet was very active in Hedemarken Lutheran Church, participating in Ladies’ Aide, teaching Sunday School, singing in the choir, and helping out regularly with any church event. Beginning in the 1970s, Norm and Harriet began wintering in Arizona, an annual tradition that lasted until the late 1990s. Harriet was an excellent cook and baker, known for her Christmas cookies, lefse, and famous flatbread. Family was very important to Harriet, and she never turned down an opportunity to host dinner or supper for her kids and grandkids. She loved children and especially enjoyed playing with her great-grandkids the past few years. Working on crossword puzzles was one of her favorite hobbies and she always had a bag of pennies ready for a card game. Harriet will be remembered for her warm, outgoing, and oftentimes straightforward personality – she always let you know how she really felt! Harriet was a loving wife, mother, sister, aunt, grandmother, great-grandmother, and friend who will be missed by many. Harriet was preceded in death by her parents; husband, Norm who died in 2014; son, Steven who died in 2019; sister, Norita Mark; brothers-in-law, Floyd Mark and Frank Fjestad, sister-in-law, Anne Fjestad, and step-mother, Selma “Sally” Swendsrud. Survivors include her son, Greg of Fergus Falls; grandchildren, Zach (Jill) Fjestad of Fergus Falls, Kelsey Fjestad of Bloomington, MN, Abby Tjaden of Portland, Oregon, Alison (Dan) Owen of Blaine, MN, and Dexter Aaberg of Rothsay; great-grandchildren, Daniel, Joshua, and Madelyn Fjestad and Gavin and Graham Owen; sister, Gloria Brown of Fargo, ND; brothers, Donald (Joyce) Swendsrud of Monticello, MN and David Swendsrud of Hugo, MN; half-brother, Jerry (Ruth) Swendsrud of Fergus Falls, and many nieces and nephews. Memorials preferred to the Hedemarken Cemetery Fund. Visitation: one hour prior to the service at the church Outdoor Memorial Service: 2:00 p.m., Friday, July 31, 2020, Hedemarken Lutheran Church, Carlisle, MN. Please bring your own lawn chair Clergy: Reverend Chris Eldredge Interment: Hedemarken Cemetery, Carlisle, MN Public Gathering: 4:00 p.m., Friday, July 31, 2020, Zach's residence 27500 County Highway 21, Fergus Falls, MN 56537 Arrangements are provided by the Olson Funeral Home of Fergus Falls. Online condolences may be sent to www.OlsonFuneralHome.com

Harriet Fjestad, 89, of Fergus Falls, passed away on Friday, July 17, 2020, at Lake Region Healthcare. Harriet Irene Swendsrud was born in Fergus Falls on June 8, 1931, to Chester and Norma (Bergerud) Swendsrud. She grew up on the family farm... View Obituary & Service Information

The family of Harriet Fjestad created this Life Tributes page to make it easy to share your memories.

Harriet Fjestad, 89, of Fergus Falls, passed away on Friday,...