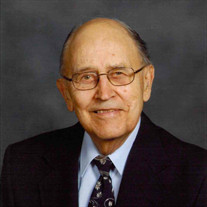 Harold John Gulleckson, 98, formerly of Fergus Falls, died Friday, January 10, 2020, at Villa Maria in Fargo. Harold was born September 18, 1921, to John and Edna Mae (Emery) Gulleckson in Maplewood Township, MN. He attended District 161 grade school. He enlisted in the United States Army and served overseas in France, Belgium, Ireland, and Germany. Harold served from 1942 to 1945, during WWII. He landed on Normandy Beach the day after the D-Day invasion. He also worked to erect the Rhine Crossing Pontoon Bridge while under enemy fire. This bridge was a key to victory for the allied troops. After his honorable discharge from the army in 1946, he began his employment at Minnesota Motor Company. He was employed there his entire working career. After the war, Harold met Lois Skow and they were married on April 5, 1947. On April 5, 1948, their daughter Carol was born and their daughter Janice, arrive on May 5, 1953. He enjoyed chopping wood for the fireplace, “puttering” in the garage, and listening and dancing to old-time music. Harold was a member of the VFW, Eagles and also First Lutheran Church for over 60 years. Harold has spent the last two years at Villa Maria in South Fargo. He enjoyed living there and received excellent care from the staff, Hospice nurses, and volunteers. Visits from Kris and Angel always brightened his days. He is preceded in death by his parents; his wife, Lois on December 19, 2014; brothers, Alfred and Robert; sister-in-law, Viola; brothers and sisters-in-law, Earl and Bess Marie Hagen and Ithel and Pauline Schipper. Harold is survived by his children, Carol (Curt) Trygstad of Fargo and Janice (Jerry) Flatin of Grand Forks; four grandchildren, Greta (Matt) Kiser of Fargo, John (Stephanie) Trygstad of Chandler, AZ, Tess (Case) Wagenaar of Grand Forks, and Mandy (Monica) Flatin of Bremerton, WA, and six great-grandchildren, Luke and Max Kiser, Cyrus and Sidney Trygstad, Caden Grasso, and Emersyn Wagenaar. Memorials are preferred to Hospice of the Red River Valley or donor’s choice. Visitation: One-hour prior to the service at the church. Service: 11:00 a.m. Friday, January 24, 2020 at First Lutheran Church in Fergus Falls. Clergy: Reverend Stan Satre Interment: Knollwood Memorial Gardens, Fergus Falls in the spring of 2020 Military Participation by the Fergus Falls VFW Post 612 and American Legion Post 30. Arrangements are provided by the Olson Funeral Home in Fergus Falls. Online condolences may be sent to www.olsonfuneralhome.com

The family of Harold John Gulleckson created this Life Tributes page to make it easy to share your memories.