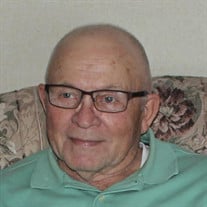 Harold “Hal” A. Doty, 86, of Battle Lake, passed away Monday April 13, 2020, at the Good Samaritan Center in Battle Lake. Harold was born January 7, 1934, to Lawrence and Naomi (Elliott) Doty in Cottonwood County, MN. He attended Hewitt High School, graduating in 1951. He then went on to St. Cloud State University, graduating with a Bachelor of Science degree in Biology in 1957. On May 23, 1953, he married Joan Dull in Deer Creek, MN. Harold began his professional career as a wildlife biologist in Salt Lake City, Utah in 1958. Three years later he transferred to the Patuxent Wildlife Research Center in Beltsville, MD where he worked in wildlife research. In 1962 to get closer to “home”, the family moved to Jamestown, ND working in the wetlands office until a position opened there at the Northern Prairie Wildlife Research Center. That’s where he settled in, and after 17 years on the prairie, they moved to Fergus Falls, MN where he completed his career at the wetland office. All through his years he was an avid hunter, fisherman, cook and gardener and he had chickens, ducks, pigeons and of course a bag full of wild asparagus or morel mushrooms now and then. At every meal he loved to point out all the foods that he grew in the garden or harvested in the wild and I remember it being asked once, “who are we eating tonight?” Hal was proud of his 3 years of active duty and 3 years of reserves in the US Navy during the Korean War. He had uncles that had served in the Navy so he thought he needed to be a sailor. He was stationed at Alameda Naval Air Station in California where he worked as an aerographers mate (weatherman). Hal was preceded in death by his wife of 64 years, Joan Ruth (Dull) Doty, his mother and father; Naomi and Lawrence Doty, one sister LaVonne (Vern) Hansen. He is survived by son, Blayne (Penny) Doty of Battle Lake, MN; daughters, Jolynn (Ross) Gienger of Jamestown, ND and Tammy (Tim) Hocum of Kodiak, AK. Also surviving are 7 grandchildren, 9 great-grandchildren and numerous nieces, nephews and 4-legged friends. Any memorials will go to local food shelves. Due to the current circumstances, a memorial service will be planned for a later date. Arrangements are provided by the Olson Funeral Home in Fergus Falls. Online condolences may be sent to www.olsonfuneralhome.com

The family of Harold "Hal" Doty created this Life Tributes page to make it easy to share your memories.