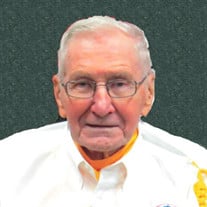 Harlan Johnson, 91, of Fergus Falls, died Wednesday, April 6, 2022, at the MN Veteran’s Home in Fergus Falls. Harlan Charles was born October 11, 1930, in Crookston to Godfrey and Agnes (Nelson) Johnson. He attended first through eighth grade in a one room rural school house and Crookston High School, graduating in 1948. He was a member of the United States Air Force from 1951 to 1954. Harlan served in the Korean War and after basic training he served in England. He was honorably discharged and received a medal for Good Conduct. He then attended NDSCS in Wahpeton, graduating in 1959 with a certificate in drafting and estimating On June 27, 1960, Harlan married Hope Lindquist at Tordenskjold Church in rural Underwood. He was employed by Lampert Lumber and Otter Tail Power Company. Harlan started at Otter Tail Power in the Surveying Department but spent most of his career as a computer programmer in Custom Information Services. He worked for Otter Tail Power for 36 years. Harlan retired in February of 1995. After retirement, he worked at Olson Funeral Home as an usher and had various roles at Bethlehem Lutheran Church. Harlan was a member of Bethlehem Lutheran Church in Fergus Falls, serving on the church council and the cemetery board. He was also a member of the Masonic York Rite Bodies and American Legion. He was also President of the Otter Tail Power Credit Union. He frequently helped at the Dalton Threshing Bee. He enjoyed gardening, church activities, and chopping down trees at his country home. Harlan was always willing to help and very proud of his grandchildren and family. Preceding him in death were his father and mother, Godfrey and Agnes; siblings, Kenneth (Audrey) Johnson, Charlene Jensrud, and Karen (John) Hendrickson. Harlan is survived by his wife, Hope; his children, Mark (Robin), Wayne (Jenny), and Scott (Sarah); grandchildren, Tess, Kai, Lars, Svea, Thor, and Alexandra; brother, Gerald (Joann) Johnson, and many nieces and nephews. Visitation: 10:00 a.m. to 11:00 a.m. Monday, April 11, 2022, at Olson Funeral Home in Fergus Falls. Masonic Service: 11:00 Monday, April 11, 2022 at Olson Funeral Home in Fergus Falls, with funeral service to follow. Clergy: Reverend Loren Mellum Military Participation: Fergus Falls V.F.W. Post 612 and American Legion Post 30 Interment: Bethlehem Cemetery, Fergus Falls, MN Arrangements provided by Olson Funeral Home in Fergus Falls. Online condolences may be sent to www.olsonfuneralhome.com

The family of Harlan Johnson created this Life Tributes page to make it easy to share your memories.