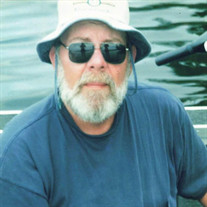 Gregory Bruce Larson, 72, a resident of Erhard, died Friday February 11, 2022, during a short term stay at Bethany on 42nd. Street, Care Facility Fargo, ND. Greg was born on August 9, 1949, in Fergus Falls, the son of Orval and Barbara (Molter) Larson. He started school in Fergus Falls, then moved with his family to rural Battle Lake in 1960. Greg graduated from Battle Lake High School in 1967, where he was an outstanding basketball player. After graduation, he enlisted in the US Navy and was a plank owner (crew member of a newly commissioned ship) of the USS Reasoner serving in the West Pac and in Vietnam. Upon his discharge he returned to Battle Lake. He then enrolled in the Electronic Technology program at Wadena Technical School. When he completed his training, he moved to Minneapolis, where he had a variety of jobs. Preferring small town life, he returned to Battle Lake, and began working as a heavy equipment operator for Dieseth Specialties. In 1991 Greg then began a career with the DHIA, retiring in 2011. On September 10, 1983, he married Bonnie Greeney at the First Lutheran Church of Battle Lake. The couple moved to Erhard, where they have resided since. He was an avid outdoorsman, loved to hunt, fish, garden, make maple syrup, and was known for his homemade bread. Greg was an avid Bison fan and enjoyed following his grandkids in all their activities. He thoroughly enjoyed western movies and books. Preceding him in death were his parents, a brother Douglas, and a nephew Kai. Survivors include his wife, Bonnie, of Erhard; a daughter, Heather Bitzan, of Brandon; a son, Sean Greeney, of Florida; three grandchildren, Erik, Sarah and Ian; two sisters, Marsha (Ron) Bowman, of Ashby and Nancy (Joe) Papa, of Albertville; a sister-in-law, Tammie Larson, of Roy, Utah and numerous nieces and nephews. In lieu of flowers, memorials may be directed to the donor’s choice. Visitation: Will begin at 10:00 AM Friday February 18, 2022 at the VFW Post 612 - 420 East Washington Ave. Fergus Falls Service: 11:00 AM Friday February 18, at the FF VFW Military Participation: by the Fergus Falls VFW and American Legion Posts Arrangements: The Olson Funeral Home, Fergus Falls On line condolences may be left at: www.olsonfuneralhome.com

The family of Greg Larson created this Life Tributes page to make it easy to share your memories.