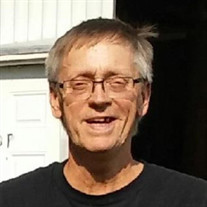 Greg Norman Fjestad, 69, of Fergus Falls passed away Wednesday, June 16, 2021 at PioneerCare in Fergus Falls after a short but courageous battle with cancer and complications from diabetes. Greg Norman Fjestad was born on November 6, 1951 in Fergus Falls, MN to Norman and Harriet (Swensdrud) Fjestad. He was baptized and confirmed at Hedemarken Lutheran Church in rural Carlisle. He grew up on the family dairy farm, attended grade school in Carlisle, and graduated from the Fergus Falls High School in 1969. He received his Associate of Arts from the Fergus Falls Junior College in 1971 and a Bachelor of Arts from Moorhead State in 1973 in business. Greg was very active in 4-H showing livestock at the Minnesota State Fair for many years. After college, he joined his father on the family dairy farm until fully taking it over in 1982. He sold the dairy cows in 1987 and continued farming until 1993. After retiring from farming, he worked a variety of jobs over the years including at Lake Area Docks & Lifts in Pelican Rapids, DL Marine Outdoor in Detroit Lakes, ShoreMaster in Fergus Falls, and most recently as a driver for Peoples Express in Wadena. In 1978, he married Rebecca Sorben and they had two children, Zachary born in 1982 and Kelsey in 1987. They later divorced. Greg was an outgoing person and enjoyed helping people, often putting other people’s needs before his own. He enjoyed playing volleyball and fast-pitch softball and in later years became an avid woodworker and gardener taking great joy in his flowers. Greg played trombone and baritone in the Carlisle Band for over 25 years, traveling to Norway in 1989 with the band. He was also a lifelong hunter, shooting numerous ducks over the Johnson Lake and pheasant hunting in South Dakota. Greg was especially fond of entertaining his grandchildren on the farm with various projects. After several difficult years, Greg overcame his addictions to enjoy life once again although his health would always be a concern. Greg was diagnosed with diabetes in the mid-2010s, and in 2020, he was diagnosed with colon cancer that had already spread to his liver. While his diagnosis was considered “treatable” and not “curable,” Greg remained positive throughout his battle. After undergoing chemotherapy treatment for several months, his body was no longer able to fight all of his afflictions. May he finally rest in peace. Greg was preceded in death by his parents, Norman & Harriet Fjestad, brother Steven Fjestad, uncle Frank (Anne) Fjestad, and aunt Norita (Floyd) Mark. He is survived by his children, Zachary (Jill) Fjestad of Fergus Falls, Kelsey Fjestad of Bloomington, MN, and Dexter Aaberg of Rothsay; grandchildren, Daniel, Joshua, and Madelyn Fjestad; aunt Gloria Brown of Fargo, ND; uncles Donald (Joyce) Swendsrud of Monticello, David Swendsrud of Hugo, MN, and Jerry (Ruth) Swendsrud of Fergus Falls; and numerous cousins. The family would like to extend their appreciation to the Lake Region Cancer Center, PioneerCare, and LB Hospice for their excellent care of Greg over the past year. Memorials preferred to the Hedemarken Cemetery Fund Visitation: 4:00 p.m. to 7:00 p.m. Wednesday, June 23, 2021, at the Olson Funeral Home in Fergus Falls, with a prayer service at 6:00 p.m. Visitation will resume one-hour prior to the service at the funeral home. Service: 1:00 p.m. Thursday, June 24, 2021, at the Olson Funeral Home in Fergus Falls. Clergy: Reverend Christopher Eldredge Interment: Hedemarken Cemetery, Carlisle, MN Arrangements are provided by the Olson Funeral Home in Fergus Falls. Online condolences may be sent to www.olsonfuneralhome.com

The family of Greg Fjestad created this Life Tributes page to make it easy to share your memories.