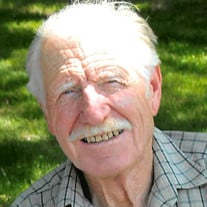 Gordon H. Sterling, a resident of Battle Lake, died Friday, September 21, 2018 at his home at the age of 91. He was born to Jack and Ella (Anderson) Sterling, June 3, 1927 in Chicago, IL. Gordon “Red” Sterling spent part of his childhood on his grandparents’ home in Aurdal Township. His parents divorced in 1928 and later moved with his mother to Willmar. Gordon graduated from 8th grade at District 66, northeast of Fergus Falls. He was boarded out to numerous foster homes in Willmar during his early school years. He left high school in his 10th year and enlisted in the Coast Guard where he served aboard the U.S.S. Covington (a frigate) searching for enemy submarines in the North Atlantic. Following his service in the North Atlantic, Gordon transferred to construction unit in the Pacific, building L.O.R.A.N Stations from Okinawa to the Philippine Islands. He was honorably discharged F1/C in 1946. In 1947 he married Betty Lou Erickson, formerly of Lake Lillian, MN. They lived on a small farm in Kandiyohi, MN. Gordon joined the Willmar Police Department in 1950 and three years following he moved to Hopkins, MN. and joined the local police department. Later he moved to Los Angeles, CA., with his wife and two small girls, working in the construction field and was later accepted into the L.A.P.D. but turned the position down and moved back to Minnesota. While living in Los Angeles son Wayne was born into the family. After moving back to Minnesota Gordon had many different jobs, which included a trucking business in 1957, later joining the Minnetonka Police Department in 1959. Eventually the family purchased a farm in New Germany, MN. where his mother passed away in 1964. Following her passing the family moved to Willmar and took over the farm where his family had lived. Gordon started a band in Willmar called “The Sterling Strings” which became very popular throughout the area. He wrote many songs which he sent to Nashville and California, none of the songs made the big time. In 1972, Gordon and Betty moved to Fergus Falls where they farmed and went into heavy equipment construction with their son Wayne. Gordon and his son Wayne also built homes in the area and later went into manufacturing Redster Construction Lift. In the late 1980’s Gordon and his wife Betty went to Texas for approximately four years, where they built many houses and raised cattle. It was heard by some that Gordon stated “moving around never paid much, but you can get a quality education.” He was a man of many talents, airplane pilot, carpenter, equipment operator, all fields of construction and much more. Those who knew Gordon best will tell you he was kind, generous and a God-fearing man. He was always ready to help the less fortunate in life and to assist his thoughtful friends for the many years that God gave him. In 2014, Gordon wrote a book called “Run Red Run”. He wrote the book mainly for his grandchildren and great grandchildren, so hoping they would find something of value while reading the book. Gordon also wrote many poems that are about parts of his life. Gordon and Betty are members of the Stavanger Church, VFW and American Legion of Fergus Falls. Preceding him in death were his parents; son, Wayne Sterling; great-granddaughter, Stassi Teberg. Survivors include his wife, Betty Sterling; children, Kathy (Dan) Langva of Clearwater, Lynda Eklund of Battle Lake; grandchildren, Todd (Tina) Eklund, Nathan (Beth) Eklund, Eric Eklund, Marc (Jaime) Langva, Derrick (Sarah) Langva, Sara (Lou) Eklund, Alicia (Nick) Teberg, Blake (Danielle) Sterling, Cally (Deven) Anderson and Chelsea Sterling; great grandchildren, Kaitlind, Hannah, Carson, Ella, Summer, Ethan, Troy, Avery, Luke, Olivia, Max, Zoey, Haven, Emmit, Sawyer, Nevaeh, Parks and Gunner; former daughter-in-law, Laura (Ed) Sterling. Visitation: will be one hour prior to the service Service: 1:00 p.m. on Thursday, September 27, 2018, at Stavanger Lutheran Church, rural Fergus Falls Clergy: Pastor Matt Rieniets Burial: Stavanger Cemetery, rural Fergus Falls, MN Arrangements provided by Olson Funeral Home, Fergus Falls, MN. Online condolences may be sent to www.olsonfuneralhome.com

The family of Gordon H. Sterling created this Life Tributes page to make it easy to share your memories.