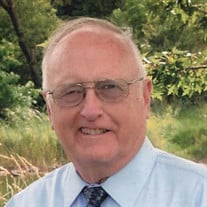 Gordon Franklin Flatin, 88, of Fergus Falls, died Wednesday, September 29, 2021, unexpectedly at his residence. Gordon was born December 22, 1932, in Rothsay, MN, the son of Lewis and Christiana (Larohl) Flatin. He grew up in Rothsay and attended school in Rothsay, graduating in 1951. During his school age years, he moved in with his brother and sister-in-law, Alvin and Selma Theodorson; along with their two children, Lyman and Beverly, who he considered to be his brother and sister. He served in the United States Navy from 1952 to 1956 when he was honorably discharged. Gordy was united in marriage to Annabelle Tenney of Fergus Falls on September 15, 1956. The couple moved to northeast Minneapolis, where he worked for a short time for Land O’ Lakes. In 1960 they moved to Coon Rapids where he began his career with Fairway Foods. In 1976 he moved with the company to Northfield working full-time in the warehouse and he ran the Fairway Employees Credit Union part-time until 2000. He retired from Fairway Foods after 33 ½ years and the couple moved back to Fergus Falls. He enjoyed camping, playing cards, drinking coffee, and laughter. He was preceded in death by his parents; brothers, Lloyd, Lawrence, Ed, Orville, and Clifford Flatin; step-brothers, Alvin, Richard, and Lyman Theodorson, and sister, Arlene Flatin. Gordy is survived by his daughter, Dawn (Frank) Zaspel of Fergus Falls; son, Steven (Karmen) Flatin of Vancouver, WA; three grandchildren, Joseph, Timothy, and Madison of Vancouver; sister, Bev Skogen of Detroit Lakes. Memorial Service: 11:00 a.m. Wednesday, October 20, 2021, at Zion Lutheran Church in Fergus Falls, with visitation one-hour prior to the service. Clergy: Reverend Chris Eldredge Interment: Hamar Cemetery, Rothsay, MN Arrangements are provided by the Olson Funeral Home in Fergus Falls. Online condolences may be sent to www.olsonfuneralhome.com

Gordon Franklin Flatin, 88, of Fergus Falls, died Wednesday, September 29, 2021, unexpectedly at his residence. Gordon was born December 22, 1932, in Rothsay, MN, the son of Lewis and Christiana (Larohl) Flatin. He grew up in Rothsay and attended... View Obituary & Service Information

The family of Gordon Flatin created this Life Tributes page to make it easy to share your memories.