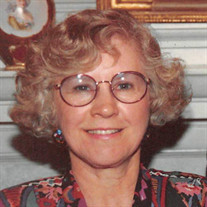 Gladys Ann Brusven, 87, of Fergus Falls, formerly of West Fargo, ND, died peacefully with her children at her side, Monday, November 5, 2018 at PioneerCare in Fergus Falls, after a long battle with Alzheimer’s disease. Gladys was born August 19,1931, to Ole and Mina (Widness) Moen in Fargo, ND. She grew up in West Fargo and graduated from West Fargo High School in 1949, where she was homecoming queen. She attended Interstate Business College and earned a secretarial certificate and was a member of Nu Phi Mu sorority. She then began working as a secretary at NDSU. It was there that she met Herman “Bruce” Brusven, an NDSU student, on a blind date. On March 21, 1952, Gladys and Herman were united in marriage at Faith Lutheran Church in West Fargo, ND. David and Diane were born over the next few years and Gladys stayed home to raise them until they were in elementary school. At that time she returned to work as a secretary at West Fargo Packing for a few years, before working for almost three decades as a para-professional in the West Fargo elementary schools. Gladys was a charter member of Faith Lutheran Church where she was a faithful and active member for almost 60 years. She was involved with card club, dance club, homemakers, Fargo Fine Arts Club, Fargo North High School Faculty Wives and was a 4-H leader. She enjoyed reading, traveling, mahjong, and especially spending time with her family and friends. She was preceded in death by her parents and her husband Herman who died in March of 2009. She is survived by her son, Dr. David (Mary Sauvageau)Brusven of Ramsey, MN and her daughter, Diane (Wally)Stommes of Fergus Falls, grandchildren, Matthew Brusven (fiancé Tracy Moe) of Minneapolis, Adam (Maggie Campe)Brusven of Lexington KY, Eric Brusven (fiancé Jess Parkhurst) of Minneapolis, Patrick Brusven (Liz Rutledge) of Seattle, WA, Ben Stommes of North Hollywood, CA, Emily (Mike)Breunig of Rochester MN, Caroline (Matthew) McLaughlin of Van Nuys, CA, great-grandchildren Nevaeh Brusven and Roman Breunig, one niece, four nephews, and special friend and companion Jerry Burner. Memorials preferred to the Alzheimer’s Association or charity of choice. Visitation: One hour prior to the service at the funeral home Service: 12:00 PM Monday, November 19, 2018 at the Olson Funeral Home Chapel, Fergus Falls Clergy: Chaplain David Strom Interment: North Dakota Veterans Cemetery, Mandan ND, at a later date. Arrangements provided by Olson Funeral Home, Fergus Falls Online condolences may be sent to www.olsonfuneralhome.com

Gladys Ann Brusven, 87, of Fergus Falls, formerly of West Fargo, ND, died peacefully with her children at her side, Monday, November 5, 2018 at PioneerCare in Fergus Falls, after a long battle with Alzheimer&#8217;s disease. Gladys was born... View Obituary & Service Information

The family of Gladys Ann Brusven created this Life Tributes page to make it easy to share your memories.