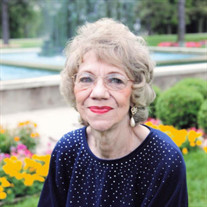 Geraldine “Geri” Florence Mulvaney, 82, a resident of Fergus Falls, Minnesota passed away on Saturday, November 13th, 2021 at Park Gardens Senior Living under the care of hospice. She was born on December 11th, 1938, in Mankato, Minnesota, daughter of Olga (Tillman) and Ervin Westberg. She grew up in Mankato where she attended school. On November 30th, 1957, she married Jim Mulvaney in Janesville, Minnesota. Jim and Geri welcomed their first child, Michael, in July of 1958. Following Michael “Mike” was Rodney “Rod”, Bradley “Brad” and Melissa “Missy”. Geri supported Jim with his work and business ventures including Spinners Liquor Lounge in Mankato. They enjoyed spending time with friends at Spinners and loved visits by the Minnesota Vikings players during their training camps in Mankato in the 70s. After 10 years, Jim retired from this business. They moved their family to Fergus Falls in 1976 when Jim became a regional and district manager for AFLAC. During his time at AFLAC, they traveled on cruises to Hawaii and the Bahamas. They also traveled to San Francisco, Washington DC and Reno to attend conventions. Jim and Geri also welcomed Bret and Marc to their family. Geri was a homemaker, and she created an environment that welcomed visitors and where people felt comfortable. There was always plenty of food available and she loved to shower everyone with treats and beverages. Geri often had a variety of homemade pies on her counter and Jim had freshly cut flowers from the garden on the table. You’d generally find their kids with their friends around, and later their adult kids back home visiting, then the grandkids. Geri had a natural humor about her. She called her grandkids “lopas” and had comical expressions such as “You look like the last rose of summer!” or “What a knuckleburger!”. Up until the end of her life she continued making up memorable sayings which made her family laugh. No matter who you were (from a family member to the maintenance man at the assisted living), she would never let you leave until you responded to her “See you later alligator!” with “After while crocodile!”. Geri treasured memories and loved to show off pictures and share stories. She looked for the good in people and in life, never speaking ill words about anyone (other than a politician or two) and you never heard her complain. Geri loved her family above all else and was everything a wife, mom, and grandma should be. She was the matriarch of her family and left a legacy of silliness and love. She will be dearly missed by all who were lucky enough to know her. Preceding her in death were her parents, Olga and Ervin; her son, Brad; her husband, Jim; her brother-in-law, Jack Mulvaney; her sister, Bonnie Kienlen; her brother, Gayle Westberg; nephews Dana Oachs and Steven Westberg; nephew in Special Forces, Troy Westberg; her mother and father-in-law, John and Bertha Mulvaney; and numerous aunts and uncles. Survivors include, her children: Mike (Becky) Mulvaney of Fergus Falls, Rod (Kristi) Mulvaney of Fargo, Melissa Samuelson of Fargo, Bret (Carmen) Mulvaney of Texas, Marc Mulvaney of Fargo; seven grandkids: Kelly Glennon, Gina Pederson, Michael Mulvaney, Matthew Mulvaney, Aaron Samuelson, Ashley Bixby, Amelia Lemar; eight great-grandkids: Gabriel Mulvaney, Clayton Pederson, Elijah Pederson, Zoey Glennon, Kiera Glennon, Jaelyn Lemar, Elaena Lemar, Bennett Lemar; four sisters: Marlene Oachs, Shirley Westberg, Gladys Mulvaney and Nancy Johnson; three brothers: Les (Wanda) Westberg, Gary (Mary) Westberg and Dennis (Connie) Westberg; two sisters-in-law Kathy Sutter and Patty (Gary) Otto; as well as numerous nieces and nephews, including Dale Mulvaney, her “bonus son”. Blessed be the memory of Geri Mulvaney A verse found handwritten from Geri’s Bible: Romans 15:13 “May the God of hope fill you with all joy and peace as you trust in Him, so that you may overflow with hope by the power of the Holy Spirit.” A private family service will be held. Arrangements provided by the Olson Funeral Home in Fergus Falls. Online condolences may be sent to www.olsonfuneralhome.com

Geraldine &#8220;Geri&#8221; Florence Mulvaney, 82, a resident of Fergus Falls, Minnesota passed away on Saturday, November 13th, 2021 at Park Gardens Senior Living under the care of hospice. She was born on December 11th, 1938, in Mankato,... View Obituary & Service Information

The family of Geraldine Mulvaney created this Life Tributes page to make it easy to share your memories.