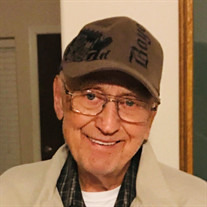 Gerald “Jerry” Hellen, 87, formerly of Fergus Falls, died Monday December 16, 2019 at his residence in Prescott, AZ. Gerald Irving Hellen was born February 21, 1932, in Brainerd, MN to Ferdinand Hellen and Bertha C. Shelhorn. He attended Catholic grade school and Brainerd High School. After high school he attended St. Cloud University. On August 28, 1965, he married Nona Mareski in Proctor, MN. Jerry was a teacher in Alaska and also in new Brighton, MN. He then worked for the State of Minnesota Corrections Department as a parole officer for 27 years. He retired in 1997 at the age of 59. He was a member of the U.S. Army-MPC serving for two years. He was in Germany an served in the Korean War. He received the Army Occupation medal while in Germany and also the National Defense Service Medal. He was a member of the VFW, Knights of Columbus, Big Brothers/Big Sisters, and Sacred Heart Catholic Church. Jerry enjoyed Golden Glove boxing, hunting and fishing, woodworking, the outdoors, dancing, and antiquing and thrifting. He was very active in and loved his Catholic church. He was preceded in death by his parents, Ferd and Bertha Hellen; sisters, Sally (Frank) Perry, Marie (Moth) Porwall, Dorthy (Margret Mary) Hellen, and brothers, George (Elaine) Hellen and Don Hellen. He is survived by his children, Gary (Shannon D’Anna) Hellen, Gail Vamadeva, and Greg (Karen Quam) Hellen; his former wife, Nona Hellen, and numerous nieces and nephews. Our Father and friend, Jerry Hellen, was an incredibly kind-hearted sensitive man. His beautiful blue eyes would fill with joy and life when he laughed. His heart was so faithful to God and to the Lord Jesus Christ. He loved his children deeply. All he ever acquired and did was for us. We love you dad. ♥️ A service will be held in the Spring of 2020. Arrangements are provided by the Olson Funeral Home in Fergus Falls. Online condolences may be sent to www.olsonfuneralhome.com

The family of Gerald "Jerry" Hellen created this Life Tributes page to make it easy to share your memories.