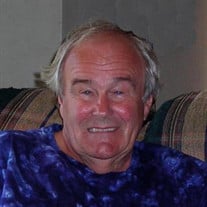 Gary Robert Becklund, born in Jamestown, ND to Lauretta and Robert Becklund, passed away peacefully on September 28, 2021 at the age of 80. Gary and his family moved to Fergus Falls, MN where his dad started the Texaco Service station and Becklund Oil. Gary graduated from St. Cloud State University and was passionate about cars, planes, golf, hunting/fishing, stock trading, and good food and wine. He traveled much of Europe and the US buying and selling cars, opened a pizza restaurant in Fergus Falls while still in High School, worked with his brother in the family business, sold HydraTroll motors with his dad, worked for a radio station in Denver, attempted to open a diaper factory off of Greece, dabbled in real estate investments and eventually became a catastrophic insurance adjuster later in life. He was married and divorced twice, first to Karen Lund, then Florence Laborde. He was the proud father of three girls (Simone, Stacey & Alexia) and two boys (Scott & Andre). He is preceded in death by his parents and is survived by his brother Tom (Jan) Becklund, sister Robin Newcomb, daughters Simone Talbot, Stacey Becklund, Alexia Becklund Cross, sons Scott Becklund and Andre (Karissa) Becklund, grandchildren Hunter (Simone Talbot), Rawnson (Stacey Becklund), Evan, Andrew and Rylie (Alexia Becklund Cross), Sage and Mae (Scott Becklund), and Camden and Hadley (Andre Becklund), as well as three great grandchildren, Aubree, Dayton and Asher. He will be missed dearly and will be remembered for his charismatic personality, humor, great friendships, dashing good looks (you’re welcome, Dad), and incredible stories about his travels and adventures. Family and Friends are welcome to attend a memorial service at Olson Funeral Home in Fergus Falls at 3:30 pm on Friday, October 15th. Father Patrick Hoeft will be officiating. Please refer to Gary’s Tribute Wall for a link to the live-stream of the memorial service Public Visitation: 4:00 p.m. to 6:00 p.m. Friday, October 15, 2021 at the Olson Funeral Home in Fergus Falls. A burial following the service will be held at Oak Grove Cemetery and the family will be toasting drinks to Gary at the Eagles after that. Arrangements are provided by the Olson Funeral Home in Fergus Falls. Online condolences may be sent to www.olsonfuneralhome.com

Gary Robert Becklund, born in Jamestown, ND to Lauretta and Robert Becklund, passed away peacefully on September 28, 2021 at the age of 80. Gary and his family moved to Fergus Falls, MN where his dad started the Texaco Service station and... View Obituary & Service Information

The family of Gary Becklund created this Life Tributes page to make it easy to share your memories.