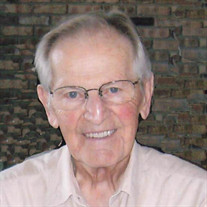 Fred Ralph Smith, 98, passed away peacefully of natural causes at PioneerCare in Fergus Falls, MN on the morning of December 26, 2020. The son of Fred William and Helen (Stenstrom) Smith, he was born in Minneapolis on August 12, 1922. Growing up there, he was baptized and confirmed at Emmanuel Lutheran Church, attended Webster Elementary School and graduated from Edison High School in 1941, where he first met Mary Soldahl. Fred and Mary were married on September 5, 1943 and shared almost 73 years of marriage before Mary died in August 2016. He served in the U.S. Army Signal Corps from 1943 to early 1946, with duty throughout much of the South Pacific during the heat of summers and in postwar Japan in the cold of winter. He was a proud member of the Veterans of Foreign Wars. In 1946 he began a career of 39 years with Graybar Electric Corporation, first in the Minneapolis branch office, followed by 29 years as the northwest Minnesota district sales representative with his office in Fergus Falls. He and Mary, together with their children, were longstanding members of First Lutheran Church and active in community affairs. After retirement, Fred and Mary became Arizona winter residents until 2011, returning to Fergus Falls for half or more of each year. That provided opportunities to be with family members and friends, to travel, and to participate in outdoor activities. They especially invited each of their grandchildren for a weeklong visit plus tour of the southwest. Due to Mary’s declining health, they again became year-round Fergus Falls residents, with Mary needing to move into PioneerCare in early 2011, and shortly after her death in 2016, Fred moved to PioneerCare because of increasing health care needs. The tender, thoughtful care of both Mary and Fred by Pioneer staff has been much appreciated. Both Mary and Fred were graduates of LB Hospice care, having shown significant improvement while under their additional care. Fred and Mary are remembered for their lifelong love and support of their children, grandchildren, and great-grandchildren. During their extended time at PioneerCare, Fred would drive from their home each day to spend time with Mary. Along with his dedicated work for Graybar Electric, he was noted for his diverse skills with home projects, his careful financial management, a reflection of having lived through the Great Depression and World War II, attention to physical well-being, and enjoyment of outdoor activities, especially golf. Linda, his daughter-in-law, recalled… “A life well lived and well loved.” Preceding him in death were his parents; his sisters, Ruth, Lois, and Jean; daughter-in-law, Barbara, and niece, Ruth Anne Tetzman. Survivors include, daughter, Susan (Gary) Clambey; sons, Mark (Ramona) and Paul Smith; grandsons, Mark (Kelli Lind) Smith, Eric (Linda van Dyk) Clambey, Bryce (Dacotah Nelson) Clambey, Shelbert (Alexis Lombardi Nelson) Smith; great-grandchildren, Jeffrey and Michael, Lula and Hank, Tabor and Prairie; nieces, Nancy Hertzog (also his Goddaughter), Christine Soldahl, Kathy Sinnett, and Nancy Lounder; nephews, Ralph Hammond and Eric (Elizabeth) Soldahl; great-nieces, Paula Emmons and Lori Tetzman; cousins, Leslie Porter and Brian Plankey. Memorials are preferred to First Lutheran Church, Radio Fund, 402 S. Court Street, Fergus Falls, MN 56537 or Habitat for Humanity International, Marquis Two Tower, 285 Peachtree Center Ave NE #2700, Atlanta, GA 30303, or PioneerCare Foundation 1131 S. Mabelle Ave Fergus Falls, MN 56537 Due to current public health concerns, a private family funeral service will be held at Olson Funeral Home, with a Live-Stream event at 1:00 p.m., on Saturday, January 2, 2021. Please refer to the funeral home website for a link to the Live-stream. The interment will follow at the First Lutheran North Cemetery. Clergy: Reverend David Strom Military Participation: American Legion Post 30 and VFW Post 612 Arrangements are provided by the Olson Funeral Home in Fergus Falls. Online condolences may be sent to www.olsonfuneralhome.com

Fred Ralph Smith, 98, passed away peacefully of natural causes at PioneerCare in Fergus Falls, MN on the morning of December 26, 2020. The son of Fred William and Helen (Stenstrom) Smith, he was born in Minneapolis on August 12, 1922. Growing... View Obituary & Service Information

The family of Fred R. Smith created this Life Tributes page to make it easy to share your memories.