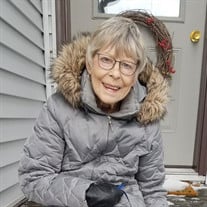 Fonda Lee (Dahl) Lunde, 84, of Fargo formerly of Fergus Falls, died Sunday, December 19, 2021 at Essentia in Fargo. She was born on September 1, 1937, the first of four children of Forrest and Ione (Donely) Dahl, where she lived in a small house on Vernon Avenue in Fergus Falls. Fonda attended McKinley Elementary School and Fergus Falls High School, both in Fergus Falls before going away to college at Gustavus Adolphus, St. Peter, MN. She moved to Moorhead, MN in 1968 where she attended Moorhead State College, and completed her degree in social work. Fonda then began her career in social work as a case worker at Catholic Family Service in Moorhead. In 1969 she moved into a brand-new house in Fargo where she continued her social work career until 1990. Fonda continued with more college at Northwest Technical College and Minnesota State University in the early 90s. She then worked as a fraud investigator at U.S. Bank, Fargo, from 1998 through 2018 when she finally retired. In 1958, she married William Crowe in Fergus Falls, they divorced in 1965. She later married David Lunde in 1968, they divorced in 1990. Fonda enjoyed sewing dresses, curtains and quilts with her 1957 Singer sewing machine (which she still had); knitting and crocheting caps, mittens and scarves; gardening (potting flowers, planting wildflowers, and planting hastas from her mother’s garden on Otter Tail Lake); baking cookies, cake and brownies; cooking music, and playing her piano and trombone (she had to fake seventh note because her arms were too short for the slider out all the way); dancing and swimming (she was a certified senior lifeguard, and had her lessons on Otter Tail Lake). She loved and spent a lot of time at her parent’s cottage on Otter Tail Lake, it was her home away from home. She lived there during the summer months as a young child through going away to college at Gustavus Adolphus in St. Peter, MN in 1955. Fonda’s grandchildren, great-grandchildren, and going to the lake were the loves of her life. Preceding her in death were her father, Forrest; her brother, Victor, and her mother, Ione. Fonda is survived by her two brothers, Ron (Gail) Dahl of Minnetonka and Forrest H. Dahl of Fergus Falls; a son, Todd of Fargo; a daughter, Kimberly of Fargo; a granddaughter, Michelle of Wadena; grandson, Jesse Schweitzer of Fargo, and four great-grandchildren, Jayelyn Rietsema, Jordyn Rietsema, Kannon Rietsema, and Aspen Rietsema all of Wadena. Memorial Service: 11:00 a.m. Saturday, January 8, 2021, at Bethlehem Lutheran Church in Fergus Falls, with visitation one-hour prior to the service at the church. Clergy: Reverend Loren Mellum Interment: Bethlehem Cemetery, Fergus Falls, MN Arrangements provided by the Olson Funeral Home in Fergus Falls. Online condolences may be sent to www.olsonfuneralhome.com

Fonda Lee (Dahl) Lunde, 84, of Fargo formerly of Fergus Falls, died Sunday, December 19, 2021 at Essentia in Fargo. She was born on September 1, 1937, the first of four children of Forrest and Ione (Donely) Dahl, where she lived in a small... View Obituary & Service Information

The family of Fonda Lunde created this Life Tributes page to make it easy to share your memories.