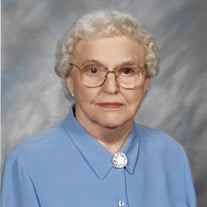 Florence H. Valen passed away on February 14, 2020, at PioneerCare Center in Fergus Falls, Minnesota. She was a few days short of her 103rd birthday. Florence was born at home near Alexander, Iowa on February 20, 1917; the daughter of Christian and Gertrude Miller. She attended country schools and graduated from Alexander High School in a class of 9. She then attended Hamilton Business College in Mason City, Iowa. She married Tom (Talmadge) H. Valen in 1938, and they lived in Hampton, Sioux City, and Humboldt, Iowa. In addition to family life, she worked as a bookkeeper, seamstress, as part of the family’s hardware business and finally as the Jr. High School Secretary in Humboldt. They moved to Fergus Falls, Minnesota in 1998 to be near family. Tom and Florence spent many of their later years with a sense of adventure as they traveled through the United States with their travel trailer as well as trips to England and Norway. Florence is also remembered as a 4-H leader, gardener, for her talent as a seamstress and in all sorts of handiwork. Florence is preceded in death by her husband, Tom; two brothers, Morris and Leroy, and sister, Joyce Nail. Florence is survived by her sister, Mildred Lyons; children, Gary Valen (Betsy Lyman), Thomas Valen (Martha), and Mary Beth Ehrenberg (Charles); four grandchildren, Mary and David Valen (Leanette), Anna Kjesbo (Matthew), and Megan Ehrenberg ; seven great-grandchildren, Shawnee, Dakota, and Skylar Valen, Benjamin Plant, Kylie, Brynn, and Grayden Kjesbo; two great-great-grandchildren, Micheal Sudbrock and Jerimiah Grenz. Also surviving are her step-grandchildren, Jonathon Spencer (Lisa) and Thomas Spencer (Caitlin Chun-Kennedy), Allison Punwani (Pete), and five step-great-grandchildren, Riley and Liam Spencer and Lilah, Brielle, and Samuel Punwani. Blessed be the memory of Florence Harriet Valen Visitation: One-hour prior to the service at the funeral home. Memorial Service: 3:00 p.m. Thursday, February 20, 2020, at the Olson Funeral Home Chapel in Fergus Falls. Clergy: Reverend Dr. John Carpenter A second gathering and burial will be in Humboldt, Iowa at a later date. Interment: Indian Mound Cemetery, Humboldt, Iowa Arrangements are with the Olson Funeral Home in Fergus Falls. Online condolences may be sent to www.olsonfuneralhome.com

Florence H. Valen passed away on February 14, 2020, at PioneerCare Center in Fergus Falls, Minnesota. She was a few days short of her 103rd birthday. Florence was born at home near Alexander, Iowa on February 20, 1917; the daughter of Christian... View Obituary & Service Information

The family of Florence Valen created this Life Tributes page to make it easy to share your memories.