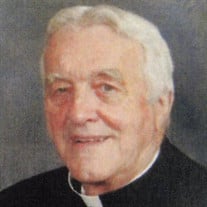 Father William “Bill” Gamber, 91, of Fergus Falls, died Saturday, October 24, 2020, at Woodland Lodge. He was born on April 16, 1929, and grew up with his sister Marieloise “Duffy” Gamber Brimhall and his brother Charles LeRoy “Bugs” Gamber in Fergus Falls, MN. He was the son of Charles LeRoy Gamber and Margaret Helen Adamson Gamber. He attended the venerable old Jefferson Grade School and then graduated from the Washington Junior and Senior High School in 1947. He attended college at Crosier Seminary for two years. In 1950, he enlisted in the United States navy, spending four years at Barbers Point Naval Air Station in Hawaii. In 1955, he enrolled at St. Thomas College, St. Paul, MN, graduating in 1958. During his tenure at St. Thomas, he worked in the manuscript department of the Minnesota State Historical Society. Upon graduation from St. Thomas, he was named Curator of the Minnesota State Historical Society Museum. In 1959, he entered the St. Paul Seminary and was ordained a priest on February 22, 1964, at the Cathedral of St. Paul as a priest of the Archdiocese of St. Paul and Minneapolis. Fr. Bill ministered at the Church of the Holy Spirit, St. Therese, and St. Vincent, all in St. Paul; and at St. John the Baptist, Hugo, MN. He served as Chaplain at the Minnesota Veteran’s Home in Minneapolis, and as a Chaplain in military status at the Minneapolis Veteran’s Hospital for 17½ years. He was a friend of the Little Sisters of the Poor. With permission of Archbishop Harry Flynn, Fr. Bill retired from the Archdiocese of St. Paul and Minneapolis and returned to his hometown of Fergus Falls and took care of his aging mother for six years. His mother died at the age of 98 in 2002. Despite being retired, Fr. Bill remained very active in sacramental ministries, concelebrating at Our Lady of Victory Catholic Church with his presence at Mass and funerals; hearing confessions; and administering the Sacrament of the Sick, with frequent outreach to the hospital. Fr. Bill’s life was inspired by many favorite saints, and he promised and followed through on praying for and saying Masses for many. Each year for the OLV Fall Festival raffle, Fr. Bill was top ticket seller and buyer. He displayed extreme generosity and support for Our Lady of Victory Catholic School. He was also a benefactor of the ministry of Fr. Lucho Palomino of Chimbote, Peru. His avocation had been the rescue and restoration of several historic homes – an interest in preserving our national heritage. In 2005, to keep alive the spirit of the Washington High School Class of 1947, Fr. Bill and sculptor Ian Dudley erected on the corner of Summit Avenue and Whitford Street, the bronze statue of Joseph Whitford, founder of Fergus Falls. Fr. Bill was preceded in death by his parents; brother, Charles “Bugs” (Jane) Gamber; sister, Marieloise “Duffy” (M. Richard) Brimhall; and his niece, Nancy Leonard. He is survived by his nieces and nephews: Bruce Brimhall, Otter Tail Lake, MN; Charles (Deborah) Gamber, Englewood, CO; Steven (Carol) Brimhall, Otter Tail Lake, MN; John Gamber, Thailand; Susan (Art) Harter, Centennial, CO; Margaret (David) Knutson, Crystal, MN; Nancy Brimhall, Underwood, MN; and nephew-in-law, Mark Leonard, Thorton, CO. He is also survived by many grand nieces and nephews. Grieving his loss are also the Our Lady of Victory Parish Community in Fergus Falls, which includes his brother priests, Fr. Alan Wielinski and Fr. Patrick Hoeft; and his fellow priests and friends in the St. Cloud Diocese, the Archdiocese of St. Paul and Minneapolis and the Fargo Diocese. Memorials may be directed to Otter Tail County Historical Society, Fergus Falls, or Fr. Lucho Palomino, Peruvian Parish. A walk-through visitation will be held on Wednesday, October 28, 2020, from 2:30-7 p.m. There will be a 6:00 p.m. Rosary and a prayer service at 6:30 p.m. The prayer service will be live-streamed. There will be a limit of 100 people during the prayer service, due to COVID 19 restrictions, at Our Lady of Victory Catholic Church, Fergus Falls. Mass of Christian Burial will be a private family service on Thursday at 11:00 a.m., and will be live-streamed. Please refer back to the Tribute wall on the funeral home website for a link to the live-streams. Military participation by Fergus Falls VFW Post 612 and American Legion Post 30 Interment at St. Otto’s Catholic Cemetery, Fergus Falls Arrangements provided by Funeral Home, Fergus Falls online condolences may be sent to www.olsonfuneralhome.com

The family of Father William "Bill" Gamber created this Life Tributes page to make it easy to share your memories.