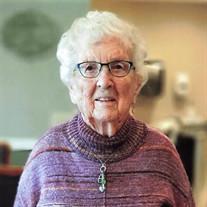 Evelyn (Luebke) Kidder, was called home to be with the Lord on Saturday, June 19, 2021, at Lake Region Healthcare in Fergus Falls, MN. Evelyn Ida was the daughter of Henry and Cornelia (Krause) Luebke, born on February 19, 1916, on the 160-acre family farm one mile northeast of Elizabeth, in Otter Tail County, MN. She was baptized and confirmed at St. John’s Lutheran Church and attended District #37 through eighth grade. Evelyn would reminisce about what life was like growing up over 100 years ago without electricity, taking the horses and sleigh to Christmas Eve church service in the dark cold snowy evening, washing clothes by hand (which she continued to do well into her 70’s), and growing, preserving and making all their food from scratch. Evelyn was employed in various homes as a housekeeper to help make ends meet until she met Clarence Johnson at a house party dance. They married at Augustana Lutheran Church on October 10, 1937, and were blessed with two children, Marlene and Allan. They farmed in rural Carlisle until Clarence passed in 1949. She moved to town with her children, took in laundry and picked strawberries for 9 cents a quart until she found work as a cook at The Lantern, where a bachelor customer would frequent and had to ask her on a date several times before she finally accepted. Lorenzo “Larry” Kidder took her hand in marriage on January 4, 1952, at the Catholic Church Parsonage. They had two children, Michael and Barb, and moved to a 40-acre farm in Friberg Township. The farm became the gathering grounds where the kids, grandchildren, and great-grandchildren had many fond memories of celebrating holidays, fishing on the Red River, playing cards, making and smoking sausage, and enjoying Evelyn’s fresh baked bread with homemade jelly, cookies, lefse, sauerkraut and dumplings and fried fish. Evelyn was a member of Our Lady of Victory Catholic Church, the Friberg Homemakers Club, the Elizabeth Senior Citizens, and the V.F.W Auxiliary. She lived life to the fullest and enjoyed staying busy in the garden, fishing, walking and painting, but most of all she cherished time spent with her family and many dear friends. Preceding her in death were her parents; both husbands, Clarence and Lorenzo; an infant son, Michael Kidder; daughter, Marlene Fiedler; one sister, Marian Bailey, four brothers, Alvin, Harold, Raymond, and Roland Luebke, and grandson, Craig Fiedler. Evelyn is survived by her children, Allan Johnson of Bloomington and Barbara (Floyd) Neuleib of Fergus Falls; son-in-law, Ray Fiedler of Wheaton; grandchildren, Linda Fiedler, Lynn (Rick) Farr, Rick (Dori) Fiedler, Kim (Brian) Hankel, Jeffery (Jeanne) Johnson, Michael (Kristi) Johnson, Katie (Troy) Tysdal, Jessica Neuleib, and Brett (Kari) Neuleib; great-grandchildren, Nick, Cole, Victoria, and Noah Fiedler, Brooke and Dylan Hankel, Wyatt and Miranda Johnson, Cody and Kendall Johnson, Brycen and Gavin Tysdal, Jacob and Preston Barney, Cedric Warner, and Caroline Neuleib; sister, Lucille Harles of Fargo, along with numerous nieces, nephews, cousins, and a host of friends. The family would also like to thank the caring staff at Mill Street Residence, Pioneer Care Center, Knute Nelson Hospice, and Lake Region Healthcare. Visitation: 5:00 p.m. to 7:00 p.m. Friday, June 25, 2021 at Olson Funeral Home in Fergus Falls, with a prayer service at 6:30 p.m. Service: 10:00 a.m. Saturday, June 26, 2021, Our Lady of Victory Catholic Church, Fergus Falls, MN Clergy: Father Alan Wielinski Interment: Oak Grove Cemetery, Fergus Falls, MN Arrangements are provided by the Olson Funeral Home in Fergus Falls. Online condolences may be sent to www.olsonfuneralhome.com

Evelyn (Luebke) Kidder, was called home to be with the Lord on Saturday, June 19, 2021, at Lake Region Healthcare in Fergus Falls, MN. Evelyn Ida was the daughter of Henry and Cornelia (Krause) Luebke, born on February 19, 1916, on the 160-acre... View Obituary & Service Information

The family of Evelyn Kidder created this Life Tributes page to make it easy to share your memories.

Evelyn (Luebke) Kidder, was called home to be with the Lord on...