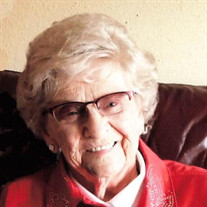 Evelyn (Evie) Pearl Horton Kenyon was born on June 29, 1925, in Fergus Falls, Minnesota to Earl and Rosa Keller and adopted by Robert and Amanda Beske. She passed away peacefully at home on March 25, 2021, with her daughter Cindy, her friend Pat, and Cindy’s friend Connie at her side. Evie grew up in Elizabeth, Minnesota and attended Fergus Falls High School. She then ventured to Minneapolis where she met and married Clifford Horton and had three sons, Gary, Roger, and Steven. In 1951, the family moved back to Fergus Falls into the family home left to her by her parents and in 1955 she gave birth to a daughter, Cindy. In 1968, Evie married Harold Schmidt. They enjoyed several years of entertaining friends and family, and traveling together. Evie was head cook for all the trail rides at Maplewood State Park. Harold was in charge of mapping out the trails for the yearly ride in September. As her children grew though their teenage years Evie welcomed all their friends, it was the house to go to. It was a safe, fun place for all night card games and parties. She especially liked to decorate their home and yard for holiday parties like Halloween and the 4th of July. If Evie ever needed anything those friends came to the rescue, for example when Mom had a 5:00 a.m. paper route and the only vehicle, Roger’s car, was in the shop it was those friends of Roger that stepped in and took turns to drive her on her route so she could get those papers delivered. Evie was always a very hard worker. She was employed as a cook at Eisenhower School for the Fergus Falls School District. For many years, she worked as a favorite waitress at the Elks Club where her son Roger also worked as a bartender while going to college. In 1968, she earned her CNA certification and worked at the State Hospital Regional Treatment Center for over 30 years, 15 years as a unit coordinator and the 15 years as a Job Placement Counselor. In 1994, Evie married Rollie Kenyon, the love of her life. They were together until his passing in 2019. They enjoyed a full and happy retirement dancing, traveling, playing cards, entertaining their friends and family, and of course cheering for the Minnesota Twins. Unbeknownst to most, she decided to take a painting class, and painted several beautiful paintings. She especially enjoyed traveling to Seattle to visit her siblings, Joyce, Beverly, Earl, and Barb. Evie loved her home and took great pride in keeping her yard and gardens attractive and filled with flowers and seasonal decorations. Her door was always open and she had food ready for drop-in guests. She especially enjoyed visits from her children, grandchildren, and great-grandchildren. For over 60 years, Evie, a woman of faith, was a member of First Lutheran Church. She read nightly from her Bible, which was a gift from her family. One of her favorite Bible passages was Philippians 4: 4-9. “Do not worry about anything instead pray about everything tell God your needs and do not forget to thank him for his answer.” She is survived by her children, Roger (Sharon) and Cindy; grandchildren, Matthew (Chelsea), Heather (Frank), Ashley, Bill (Susie), David, and Jason; great-grandchildren, Devan, Fitzgerald, Vienne, Troy, Brandon, Evie, Ally, and Jaxon; sisters, Joyce and Barbara. Preceding her in death were her parents; her husband, Rollie; her son’s, Gary and Steven; her brother, Earl, and her sister, Beverly. Evie was a joy to her friends and family and will be greatly missed by all that knew and loved her. Memorials are preferred in memory of Evie to LB Hospice, the Minnesota Veteran’s Home in Fergus Falls, and Tree Givers https://www.treegivers.com Visitation: One-hour prior to the service at the funeral home. Service: 11:00 a.m. Saturday, June 26, 2021, at the Olson Funeral Home in Fergus Falls. Arrangements are provided by the Olson Funeral Home in Fergus Falls. Online condolences may be sent to www.olsonfuneralhome.com

Evelyn (Evie) Pearl Horton Kenyon was born on June 29, 1925, in Fergus Falls, Minnesota to Earl and Rosa Keller and adopted by Robert and Amanda Beske. She passed away peacefully at home on March 25, 2021, with her daughter Cindy, her friend... View Obituary & Service Information

The family of Evelyn Horton created this Life Tributes page to make it easy to share your memories.