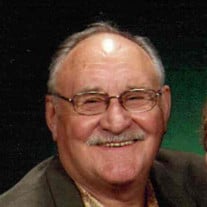 Eugene David Wilde, 84, of Fergus Falls, passed away peacefully in his home surrounded by his family on Monday, December 16, 2019, from lung cancer. Known as Dave to many, he was born on the Roehl farm in rural Fergus Falls on June 22, 1935. He was the eldest of three children. His parents were Eugene Walter “Prunes” and Mildred Anne (Roehl) Wilde. He was confirmed at St. John’s Lutheran Church in Elizabeth in 1948 by Pastor George Grabarkowitz. He later became a member of Bethlehem Lutheran Church. He attended and graduated from Washington High School in 1953. He lettered three years in Baseball, his most favorite sport. After high school he worked for Park Region Bakery and also Bunny Bread for two years. In 1956, he joined the U.S. Marine Corp stationed at Camp Pendleton in California until his honorable discharge in 1958. He joined the Minnesota National Guard and Army Reserves for a total of 21 years of service. He achieved the rank of Sargent First Class E7, graduating at the top of his class at NCO School in Minneapolis. He was very proud of his military service and would tell many stories about his time in the service. Dave and Sharon Lehman were united in marriage on May 31, 1959, at St. John’s Lutheran Church in Elizabeth. They had three children, Shawn, Darcey, and Sherri. They made their home in Fergus Falls. He started his Ottertail Power Company career on October 28, 1963, in the Special Engineering department. He worked throughout the system as a surveyor for power lines, retiring in 1998 with 35 years of service. He would regale his family on road trips about which electrical lines he surveyed. He was very proud of the work he did for OTP. Dave loved playing and in his later years, watching baseball. He played Legion ball for two years and went to the state tournament in 1952. He also played in the Fargo Legion against Roger Maris in 1951. He played for small town teams over the years, including Dalton, Underwood, and Pelican Rapids. His years spent playing on the Class A Fergus Falls Red Sox team were his most treasured. He was noted for his wild pitching, but a good homerun hitter. He so loved the sport that he decided to continue to play softball for Bob’s Tavern and Town and Country Dairy. One of Dave’s hobbies was reading non-fiction books. His favorite topics were WWII and the presidents. Dave hunted and fished with great success over the years. He also loved watching sports, especially the MN Twins and Vikings, as well as the Fergus Falls Otters, boys and girls teams alike. Dave and Sharon enjoyed attending the games at the high school. Dave was very civic minded; he was a member of the Lions Club of Elizabeth, Eagles Club, Jr Chamber of Commerce (Jaycees), Citizen City Committee appointed by the Mayor Kelly Ferber. He also gave back to his church, serving on various committees and as sexton for the St. John’s Cemetery of Elizabeth. After his knee replacement surgeries, he was asked to volunteer for the Joint Care Center under Dr. Glynn. He volunteered there for two years. He loved his family and friends with all of his heart. He loved the Lord, his Savior and is now home with God. He will be missed greatly. Dave is survived by his devoted wife of 60 years, Sharon of Fergus Falls; his 103 year old mother, Mildred; son, Shawn (Greg Schirmers) of Minneapolis; daughters, Darcey (Tom) Bye of Clitherall and Sherri (Paul Sisneros) of Clitherall; brother, Michael (Mary); sister, Judy (Larry) Leitch; sister-in-law, Bonnie Kern, brothers-in-law, Bernie Beckman and Dave Thompson, and numerous nieces, nephews, step-grandchildren and step-great-grandchildren. He was preceded in death by his father, Eugene; brother-in-law, Loren Kern; sisters-in-law, Nancy Beckman and Carole Thompson. Visitation: 4:00 to 6:00 p.m. Friday, December 20, 2019, at the Olson Funeral Home in Fergus Falls and will resume one-hour prior to the service at the church. Service: 11:00 a.m. Saturday, December 21, 2019, at Bethlehem Lutheran Church in Fergus Falls. Clergy: Reverend Tom Peterson Interment: Bethlehem Cemetery, Fergus Falls Military Participation: Fergus Falls American Legion Post #30 and Fergus Falls VFW Post #612 Arrangements are provided by the Olson Funeral Home in Fergus Falls. Online condolences may be sent to www.olsonfuneralhome.com

Eugene David Wilde, 84, of Fergus Falls, passed away peacefully in his home surrounded by his family on Monday, December 16, 2019, from lung cancer. Known as Dave to many, he was born on the Roehl farm in rural Fergus Falls on June 22, 1935.... View Obituary & Service Information

The family of Eugene David Wilde created this Life Tributes page to make it easy to share your memories.