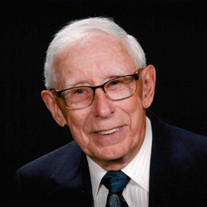 Eugene Allan Gage, 89, of Fergus Falls, died Thursday, August 26, 2021, at his residence. Eugene was born November 1, 1931, to George and Gladys (Pike) Gage in Kalamazoo, Michigan. He had close ties to his family. He grew up on a farm and learned to do everything from maintaining farm equipment to carpentry. He was the youngest in his family. He had four brothers and one sister. With all their kids, and lots of cousins, and all their kids, the Gage family reunion that was held each summer in Kalamazoo, Michigan, gathered together over 100 relatives. Allan enjoyed playing golf and bowling with his brothers, and playing games with his nieces and nephews when they were young. He was a great tennis player and that skill carried over to ping pong. Hard to beat him on the ping pong table. He graduated in 1950 from Mattawan High School in Mattawan, Michigan. He earned varsity letters for tennis. He attended Parsons Business School in Kalamazoo for two years, earning an Associate Degree in Accounting in 1952. After graduation, he was drafted into the Army. He was proud of his service in the US Army. He did basic training in Harrisburg, Pennsylvania and was then sent to Heidelberg, Germany, where he worked in the Code Room at Army Headquarters/Europe. He was honorably discharged in 1954. While he was stationed in Germany, he had the opportunity to travel to several countries in Europe. He even skied in the Swiss Alps. He was a great photographer. He started with a camera he bought in Germany. It used 35 mm film. When digital cameras were introduced, he bought one and learned how to use it, and was soon processing his photos on the computer. He has created amazing photographs. He started working at the Boylan Buick dealer in Kalamazoo in 1954. He also worked at Doubleday Printing Company and later on at Georgia Pacific Co. until his retirement in 1991. Allan met his wife, Carole Clarren, in November 1960. They met in Kalamazoo, but she lived in Chicago. Allan drove to Chicago every weekend to see her until they were married on July 14, 1962 to begin their life together in Kalamazoo. Their daughter Katharine, nicknamed Kitty, was welcomed in 1972. Allan loved his home and was proud to be able to turn his hand to almost anything to improve their house and yard, whether growing flowers and vegetables or adding landscaping features. You could tell just by looking around that Allan was proud of his place. He took pride in keeping up his equipment too. He loved his two John Deere tractors. His car and truck, as well as his tractors, were always clean and shiny. Allan loved to travel in his camper. He and Carole and Kitty traveled all over the country, camping in national and state parks. He especially enjoyed being in the mountains. The family visited parks from Acadia National Park in Maine to Yosemite in California. Even took their border collie, Trooper, on a trip to the Grand Canyon. Trooper always hated to get out of the camper when they got home. In 1999, Allan and Carole moved to Fergus Falls to be close to their daughter. He continued his pattern of working to improve his new house and yard. His neighbor once said that Allan showed all the rest of the neighbors how to take care of their yards. His wife called Allan “The Energizer Bunny” because he just kept going and going and going. Allan was a good neighbor, always ready to help someone stuck in the snow or offer to mow a yard or snow blow a driveway. Allan enjoyed living here in Fergus Falls, with its welcoming community. He always felt lucky to have been given the opportunity to live here and be close to his daughter and her family. Allan especially enjoyed watching his two granddaughters, Erika and Sonja, in all their activities. A highlight each year was watching them compete at our county fair and go on to the State Fair. Allan was a man you could depend on, a man you could trust. He was a quiet man, but he always reached out to help when he saw a need. He was loved by all who knew him. He will be sorely missed. Preceding him in death by his parents and his siblings, George (Geneva) Gage, Donald (Susan) Gage, Gaitha (Delbert) Meyle, Robert (Elva) Gage, and Harold (Judith) Gage. Allan is survived by his wife, Carole; daughter, Katharine (Richard) Lahti, and granddaughters, Erika and Sonja Lahti all of Fergus Falls. Memorials are preferred to Grace United Methodist Church in Fergus Falls or Lake Region Cancer Care and Research Center in Fergus Falls. Visitation: One-hour prior to the service at the funeral home. Service: 1:00 p.m. Wednesday, September 1, 2021, at the Olson Funeral Home in Fergus Falls Clergy: Reverend Lee Kantonen Interment: Bethlehem Cemetery, Fergus Falls, MN Military Participation: Fergus Falls American Legion Post 30 and VFW Post 612 Arrangements are provided by the Olson Funeral Home in Fergus Falls. Online condolences may be sent to www.olsonfuneralhome.com

Eugene Allan Gage, 89, of Fergus Falls, died Thursday, August 26, 2021, at his residence. Eugene was born November 1, 1931, to George and Gladys (Pike) Gage in Kalamazoo, Michigan. He had close ties to his family. He grew up on a farm and... View Obituary & Service Information

The family of Eugene Gage created this Life Tributes page to make it easy to share your memories.